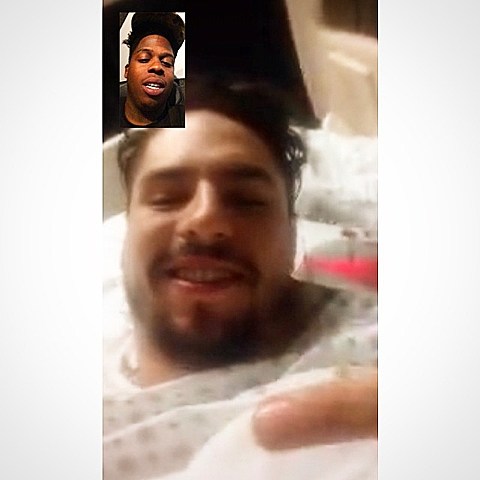 As discussed HERE and then HERE, Freddie Gibbs was allegedly the target of a shooting outside and after his show at Rough Trade in Williamsburg on Monday night (11/3). As also mentioned, two people that were with Freddie Gibbs were the ones who ended up being shot, though both are doing ok. One was shot in the hand. One was shot in the leg. Ends up the one shot in the leg was in fact Freddie's tour DJ, DJ Izzo. As you can see in the above Facetime screenshot, he is all smiles as he chats with Keith Jenkins of The Pack. Keith posted the picture to Instagram with the following message:

ONLY THE STRONG SURVIVE ! TALKED TO MY BROTHER @djizzo LAST NIGHT THEY SHOT MY MAN IN BROOKLYN LAST NIGHT GOT EM IN THE LEG HE STILL ALIVE AND DOING WELL THEY COULDN'T STOP A REAL ONE !!! THIS WAS RIGHT AFTER HE SHITTED ON THE WHOLE CLUB AND HAD ALL THE BAD BITCHES IN TEARS CUZ HE AINT WANNA TALK TO EM IF THEY WASNT GO PAY EM !! GET WELL

My cousin @djizzo got [shot] in da leg lastnight in NYC Hes in hospital RN so go follow him and wish him a speedy recovery!!!! THEY TRIED TO KILL MY NEEGAS @djizzo & @freddiegibbs ..#fuckboys get jealous and start shootin neegas wtf!!!!

Get will soon DJ Izzo!

Meanwhile. Freddie Gibbs hasn't said much since we last checked in with him. No word on actual suspects or updates in the case either.

Rough Trade NYC is open again tonight with a show by Panama Wedding, Paperwhite and Royal Tongues. And hilariously, Thursday with Nick Jonas. We might stop by Friday night to check out Cold Specks or to Saturday night's sold out Alvvays show. We'll definitely be there Sunday for the free (with LP purchase) Gruff Rhys instore.