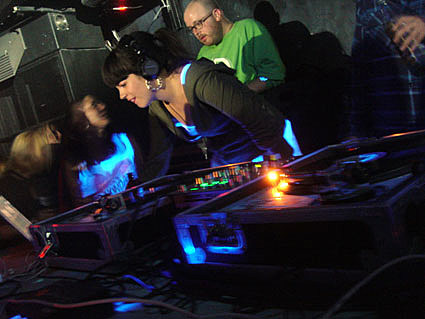 She spun about a 30 minute set spinning a nice blend of hip-hop and reggae. Mark Ronson was supposed to spin too but cancelled because he's promoting his new album in London. Lily's boyfriend (bald guy in the green shirt in the photo) and Aaron LaCrate spun as well.

Lily then cancelled her private-appearace at Studio B the next night, went on to play in California, then cancelled some shows, and has now given a reason along with some reschedulings.

I think Lily Allen should just ditch the Roseland show completely, and reschedule her NYC show at a smaller venue - possibly over multiple nights, but that's not going to happen. Instead she'll now play Roseland on June 12th instead of May 30th. Almost all of her other upcoming U.S. appearances are currently postponed until further notice. Her reason (and updated dates) below....

Hey Guys ,
I'm writing to tell you that I have cancelled many of my May and June tour commitments in America . The reason for this , is because my mummy and daddy are very rich , and I have never been in a position where i have actually had to do any hard work before . I thought that being a popstar meant going out getting trashed with famous people and sleeping in all day . The fact that this is not true has come as a huge dissapiontment to me , and as a result I am throwing the towel in .

No but seriously , I have been on tour with this album for a year now , I have fulfilled every commitment up to this point . I am tired , but more than that I don't think I have been giving my best performances recently . I have been getting really drunk because i've been so nervous about doing bad shows , and I don't want people spending money on a going to see a show that isnt the best it could be . I am not falling apart at the seems , I am not suffering with exhaustion , I am not pregnant , and I am not going to rehab . I will be here in America , promoting the album and also starting to write the second album , which I am beyond excited about . The LA and New York shows will still be happening , and I am still playing Coachella and Bonaroo and all the other festivals .

I'd like to apologise to anyone who has bought tickets , but you can get your money back , if you take 'em back to the place you bought them from .

"Lily, who will perform on 'The Tonight Show with Jay Leno' tonight and on 'The Ellen DeGeneres Show' on Wednesday, April 18th, will still play the Coachella Valley Music and Arts Festival in Indio, CA later this month and the Bonnaroo Music & Arts Festival in Manchester, TN in June. In between, she'll also perform, as previously scheduled, in Seattle, WA, Los Angeles, CA and Charleston, SC. Her date at New York City's Roseland Ballroom has been rescheduled for June 12th and she will perform on 'Late Show with David Letterman' on June 18th. The remaining U.S. dates will be postponed until later in the year."