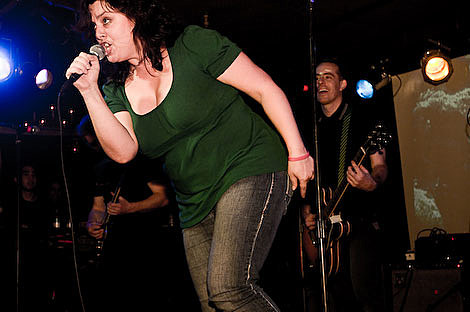 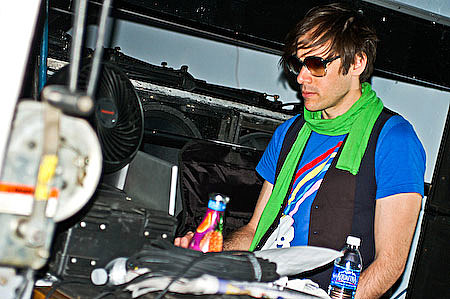 Of Montreal already announced and sold-out its December 16th show at Brooklyn's Music Hall of Williamsburg. The next day (Wednesday December 17th) Of Montreal will still be in Brooklyn at another event, but this time it will be a Kevin Barnes DJ set (DJ List Christee, actually) at The Bell House, as part of the Brooklyn venue's 1st Annual Holiday Karaoke & Dance Party. Kevin will DJ the dance party after the karaoke. The karaoke hosts will include comedians Kurt Braunohler, Kristen Schaal, Dave Hill, Eugene Mirman and more TBA. Expect surprises (but don't be disappointed if there aren't any). Anyone can sign up to sing. Tickets are still on sale.

Looking for what to expect from Kevin Barnes? Here;s one possibility... He played SXSW earlier this year as Christee - and blog Optical Atlas described the performance, in which Barnes ended up actually playing and not DJing, as "an electric guitar-driven set [with] a couple covers and an Of Montreal song."

Afterward, Kevin gave Paste Mag a description of the act:

"I intended to do something really cool and come to SXSW and establish myself as this fantastic modern DJ. But then I didn't have time, so I established myself as a completely uninspired loser DJ. But I made up a DJ name, which I think is essential. I always think of these characters and give them names, and I like the name List. It's such a bizarre first name. They say you can't trust a man with two first names, like Peter George or something. But List Christee, you can trust her. She doesn't even have a first name."

"I don't even feel like it's a performance," Barnes says. "I'm not a DJ. I'm a real-time playlist arranger. A DJ pumps up the crowd and scratches and does creative stuff on the fly. I was basically just chilling and playing music. During my first set ever, I was an iPod DJ in Oslo at this little bar and they actually pulled the plug on me. 'We don't play that kind of music.' I was playing The Cure, Beck and things that were considered more mainstream by them. It is really humiliating to have the plug pulled on you, and then to have to do the cold walk of shame home with your iPod between your legs."

No stranger to karaoke, Of Montreal also acted as NY Magazine's live-karaoke backing band at their event at Studio B back in 2007. The latest event like it was just this month, and featured Ted Leo as the house band. That night made a star of Abigail thanks to her stunning rendition of "Respect" (picture above, video below). Want to see Abigail do that again? The Bell House is also promising she will be in the house on Wednesday.

Video, flyer and all dates below... 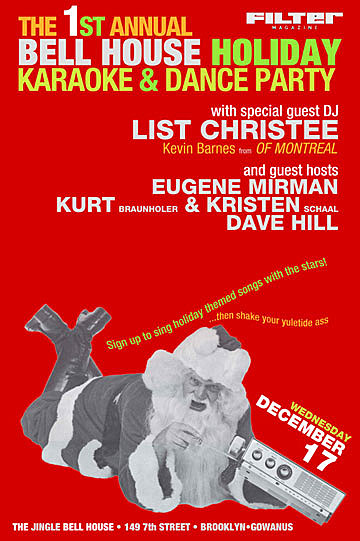