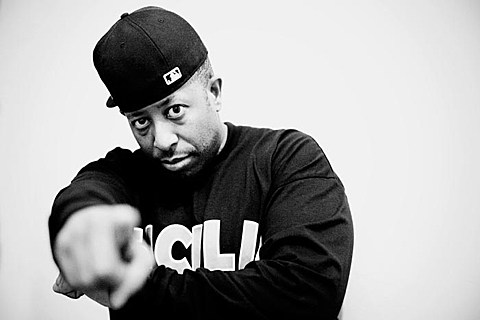 DJ Premier, one of hip hop's greatest and most influential guiding hands, is staying busier than a bee with a pollen monopoly. The Houston-born, Brooklyn-raised producer and DJ has a number of irons in the fire; as you'd expect from a guy with Discogs credits exceeding 1,300. On the production/collabo docket? Well, lots. (The man's blog refreshes more frequently than Guy Pearce in Memento checking his Twitter feed.) Yet, as always, Premo is full of surprises. He took a seat with Life + Times and let slip two biggies.

First off, there's the mysterious tease. Premier is putting the finishing touches on an LP for an as-yet-unknown performer. He avoided the name, but didn't skimp on the details:

It's a really unique project. It's a project where I sample only one artist and only used their samples for the entire album. I strictly just use that one person - took all their samples, broke it into pieces and made my own beats out of it, and scratched it - the whole album. It was gonna be an EP, but it turned into a whole album. It's gonna have nine tracks on it. It's a really cool project.

The record contains guest turns from Ab-Soul, Mac Miller, Slaughterhouse, and possibly others. It's apparently coming soon, but his KRS-One team-up, Return of the Boom Bip, has also been coming soon. . .for years. Its Facebook page is liked by tumbleweeds. So, we'll see.

However, in the year of Illmatic's 20th anniversary, Premo dropped this Nas news nugget:

This is what Nas told me recently and every time that we talk this is what he tells me; he says, "Look, I got another new album I got to do on Def Jam and then my contract is over. I'd rather do your album...that's because we can do whatever we want. There's no strings. We can just rock out." Everybody's like, "When are ya'll gonna do an album?" I'm not rushing it and I have other things to do. I don't even take it personal when he's like, "Yo, I'm working this first." Whenever he says that he's ready, I'm going in. So, that was always my way of looking at it. I never looked at it no other way. I ain't trippin.'

Whoa. Of course, Nas and Premier are no strangers, having worked together often. But, a full album of the two? Money: how do I give it to you? Details are surely forthcoming unless this quote is courtesy of one of his Multiplicity clones. Hey, it's the only way to explain how he accomplishes so much.

A clip from Scratch, the DJ documentary featuring DJ Premier, along with -- for kicks -- a classic WBLS broadcast from 1994 (complete with commercials!), below...