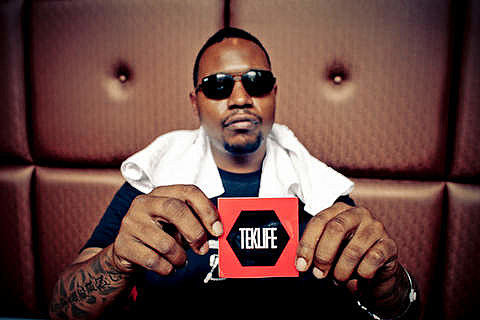 Chicago footwork producer DJ Rashad released the excellent TEKLIFE Vol. 1: Welcome to the Chi album earlier this year, and played a Brooklyn show at 285 Kent soon after with Total Freedom and J-Cush. All three of those artists will be returning this weekend for another show at 285 Kent on Sunday (9/23) with Visionist and a "surprise special guest." No word on who the guest is, but the show is the official after party for the Gang Gang Dance and Prince Rama show happening at 285 Kent earlier that night (the third of three GGD shows in NYC this weekend). Admission for this all ages party is $5 before 1 AM and $10 after.

As for LA producer Total Freedom (aka Ashland Mines), who opened on tour for Gang Gang Dance last year, he'll be landing in Brooklyn a bit earlier for a warehouse party at 110 Troutman TONIGHT (9/21) with $hayne and Rizzla. The flier for tonight's show is below.

Meanwhile, J-Cush will also be at 285 Kent on Saturday (9/22) for the previously mentioned Sasha Go Hard show. That bill also includes DJ Manny, Cedaa, and Durban. $5 at the door before 1 AM. That will be Sasha's second NYC show of this week, having played Santos with LE1F last night (9/20). How was that show? Sasha loved it.

If dancing into the wee hours of the night is your thing, those three shows are only two of the many dance options in NYC this weekend. Head below to see more...

Italian producer Nicholas makes his NYC debut at Glasslands tonight (9/21) with Jacques Renault, Down + Out, and "a special guest from down under."

Midnight Magic, Something In Spanish, and Hess Is More play a late show at Cameo tonight (9/21). Tickets for that show are on sale now.

Pictureplane, Creep, The Death Set, Le Sphinxx, and Heavenly Beat do late night DJ sets in Public Assembly's back room as part of the Et Cetera Festival (free after midnight).

Probably won't be that dancey, but the Modular Synth Autumn Equinox goes down at Death by Audio on Saturday (9/22).

If you've still got energy on Monday, head to Cameo Gallery (9/24) for the Gonjasufi show. The now Ghostly-signed Beacon has been added to that show. JimHensonInTheViceGrip is on the bill too and tickets are still available.

Not this weekend, but what better time to mention that Bok Bok, L-Vis 1990, Pictureplane, MikeQ, Slava, Rezzie, and THOMASS play a S!CK-presented show on September 29 at Moon-II in Brooklyn. Tickets for that show are on sale now.