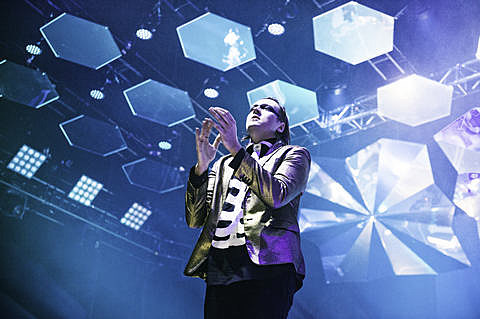 DJ Windows 98, who you may recall is the DJ moniker of Arcade Fire frontman Win Butler, is returning to NYC for two appearances in February. First, he DJs the sold-out Hold Steady show at Bowery Ballroom on February 13 (update: back on sale). Here's more details:

This year's Alt Star Party will be taking place on Friday, February 13 at the renowned Bowery Ballroom. The Hold Steady, one of America's most acclaimed rock bands, will be headlining the event. Brooklyn rockers STRNGRS will be providing opening support. Additional surprises and guest DJ sets from Win Butler (Arcade Fire), Chris Tomson (Vampire Weekend), Dapwell (formerly of Das Racist), and Stefan Marolachakis (Caveman) will keep the party going throughout the night.

Then the next night, he has his own midnight show on Valentine's Day at Baby's All Right. Doors are at 11:45 PM. Tickets go on sale at noon on Friday (1/23). That happens after the Beacon show at the same venue earlier that night with Lord Raja and Tallesen (tickets).

Three weeks later, his brother Will Butler kicks off a tour that hits NYC twice.