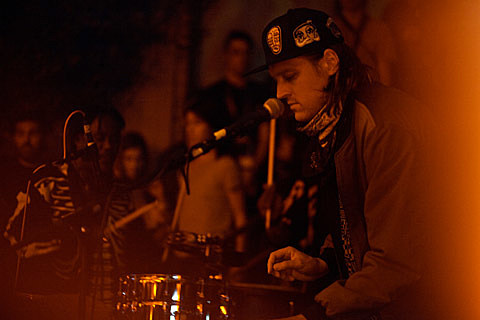 DJ Windows 98, the DJ moniker of Arcade Fire frontman Win Butler, plans to grace NYC with another of his sets on August 27 at Le Poisson Rouge. Tickets go on sale Friday (6/19) at 10 AM. Last month his Montreal DJ set included new Kanye West music, so who knows what could happen at this one?

Earlier this month, Win joined his buds Future Islands on stage in Vermont for "Seasons (Waiting On You)" (something he's done before). You can check out a video of that below.

In related news, Arcade Fire member Tim Kingsbury will be embarking on a solo career, like bandmates Will Butler and Richard Reed Parry have also done. He'll be playing under the name Sam Patch, and his first performance is at Montreal's Passovah Summer Fest on August 27 (coincidentally the same day as that DJ Windows 98 NYC show). Backing Tim will be the impressive lineup of Basia Bulat and Arcade Fire drummer Jeremy Gara.