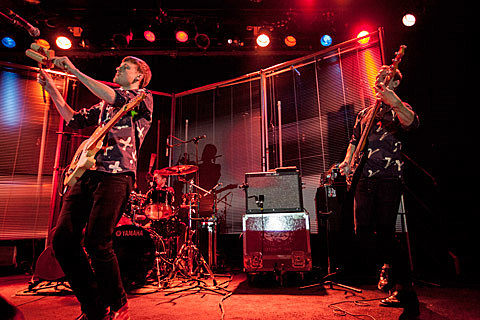 It's been two years since Django Django released their terrifically inventive debut album. The band are busy working on its follow-up but have dropped a cover of The Monkees' "The Porpoise Song" for their turn at the popular Late Night Tales mix series. The organ-drenched original, which was written by Carol King, is from the Head soundtrack, and is used in the film's opening scene where they all jump off a bridge, committing literal career suicide. If you've never seen Head, it remains a deeply weird, uncommercial film and required viewing. Django Django's version hews close to the original for the first half of the song, before pulling it fully into their own rhythmic territory in the latter half. You can stream it below.

In addition to its inclusion on Late Night Tales (out May 11), DD's "The Porpoise Song" will be released as a 7" for Record Store Day, which is Saturday (4/19) if you didn't realize. The b-side is a spoken word piece by Sherlock star Benedict Cumberbatch (!). Full tracklist for Django Django's edition of Late Night Tales, plus "The Porpoise Song" cover and streams of The Monkees original and Carol King's demo, below...