There is so much going on between now and Tuesday (2/13), I'm breaking This Week in Indie into two parts. Today you get Thursday, Friday and some of Saturday, then tomorrow will be Pt 2 with more Saturday, Sunday, Monday and Tuesday. For those of you who aren't going to Austin next week (and I know most people aren't even if it seems otherwise sometimes reading the internet) you get a chance to sample some of the international action with bands from all over the world in town before (and after) the fest. I should warn you there are a lot of bands who spell their names with all-caps in the post. I am not shouting at you.

First thing, we're giving away a pair of tickets to Django Django's sold-out U.S. debut at Glasslands Saturday night which BrooklynVegan is presenting with Popgun Booking. For your chance to win, just send an email with your name and the subject DJANGO DJANGO to BVCONTESTS@HOTMAIL.COM and we'll pick a winner at random tomorrow. Remember, it's a late show (doors at 11:30PM) and you must be 21+.

I'm pretty psyched for this show. Their debut album is out now digitally (and on Spotify) in the U.S. and is one of my favorites of 2012: danceable, melodic, trippy and organic, owing more than a little to fellow Scots The Beta Band. (Go figure: main Django Dave Maclean's older brother John was in the Betas and The Aliens.) Says The Guardian:

Those worried that British guitar music has lost its ability to refresh old forms should pay heed to Django Django, whose debut album posits an updated psychedelia that beguiles and delights. Their foundations are a rickety, minimal take on the music of the immediate pre-psychedelic era - Hail Bop employs heavily tremeloed surf guitar; Default takes Bo Diddley's shave-and-a-haircut-two-bits beat and bolts on a jerky R&B guitar line - over which are laid skittering electronics and bleached, vibratoless harmonies, as if Django Django's four members were supplicants worshipping the desert sunrise. Yet it's also an exercise in clever restraint: drummer and band mastermind David Maclean often eschews everything bar his kick drum, floor tom, cymbals and tambourines, creating an amniotic throb.

Also playing the Glasslands show will be D. Gookin, a last-minute sub for Kwes who had some visa issues. (I'll be DJing between bands.) If you can't make it Saturday night, Django Django play again on Monday at Santos (we're also presenting this show too with Neon Gold and Popgun) with the very au courant Charli XCX and Clock Opera (who play a now-sold out show at Knitting Factory too). Or go to both! More Charli XCX tomorrow.

Playing Glasslands earlier in the night on Saturday (a separate show) is another UK act, Daughter, who also play an early show the night before (3/9) at Mercury Lounge and our Friday day party at Hotel Vegas at SXSW. Originally a solo project for UK singer-songwriter Elena Tonra, Daughter is now a proper band with electric guitarist (and Tonra's boyfriend) Igor Haefeli and drummer Remi Aguilella. The band just signed to Glassnote who released Daughter's new EP, His Young Heart, which is streamable at the bottom of this post. (You can also download the EP's closing track at the top of this post.) Fans of Sharon Van Etten, Mountain Man and other spooky folk acts should not miss them. 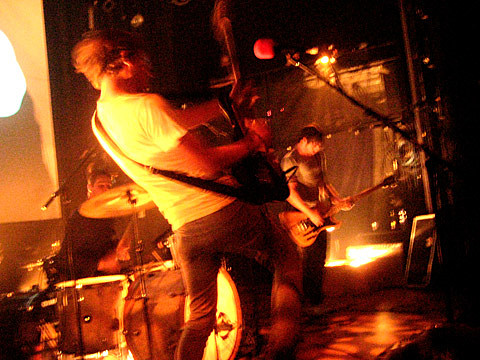 Backing up a bit to tonight (3/8) and shifting gears entirely, Toronto trio METZ make their NYC debut at Cake Shop. These guys make blazing, spazzy noise rock, reminiscent of Brainiac, the roster of Amphetamine Reptile, or McLusky. They're pretty excellent in their din, with enough form and hooks to grab hold of too. The band only have a few singles under their belt (all of which you can stream/download for free at their Bandcamp) but their debut album is in the can waiting for some lucky label to release it.

METZ are down visiting our city with their neighbors Teenanger whose debut album, Frights, is a 9-song, 20-minute kick in the head that may remind some of The Hives or The Intelligence. There's a lot of snarl and sneer, and the production is great -- clear but not slick. The whole of Frights is streaming over at Canadian website Exclaim!. You can also download a track above and watch a couple videos (both are pretty cool) at the bottom of this post.

Tonight's Cake Shop show, METZ and Teenanger are the first two bands on the bill so you might get out of there by 11 if you've got somewhere else to go. Tomorrow night (3/9), they both play Death By Audio with Pop. 1280 making for a very appealing, angsty bill.

More Canadians in town, this time on the electronic tip: TRUST and Doldrums who play a late show tonight (3/8) at Mercury Lounge and an early show at Glasslands tomorrow (3/9). After that it's off to Austin (where TRUST is also on the bill of our Friday day party at Hotel Vegas), and then some West Coast dates, a few of which are with Blood Orange. All dates, including many SXSW-week appearances, are at the bottom of this post.

TRUST, a duo consisting of is Austra drummer Maya Postepski and vocalist Robert Alfons, make vaguely gothy/sleazy synth pop that you could imagine being danced to in warehouses in 1987. The sleaze is apparent with song titles like "Candy Walls," "Gloryhole" and "This Willing Flesh." Musically, I dig TRUST but Alfons sounds more than a little like Bill Hader's Vincent Price impression which makes the whole thing borderline novelty. Their debut, TRST, is out now on Arts & Crafts and you can stream it on Spotify. I bet it sounds great in a club, though, and will say the vocals are less egregious live, and will say I thought TRUST was good last year when I saw them open for Austra.

Doldrums is Toronto resident Alrick Woodhead who guests on Grimes' Visions and will soon be touring with Bear in Heaven. I've seen him perform a few times, like at M for Montreal where I wrote:

(Doldrums) was wonderfully ADD, twiddling knobs, hammering sample triggers and pacing around the stage. Too many ideas crammed into one 20-minute set? Maybe, but it was exciting seeing talent that is only just now beginning to show its potential.

I thought he was even better when I caught him at Glasslands back in December. You're going to be hearing a lot more about this one in 2012.

The Glasslands show on Friday is also with Black Marble, a new musical venture from a couple of the Team Robspierre dudes that definitely falls in the minimal wave pigeonhole. Their Weight Against the Door EP came out last month on Hardly Art last month

Later that night at Glasslands its a separate show, with UK electro rockers TEETH. TEETH's debut album, Whatever, came out last year on Moshi Moshi and garnered favorable reviews and comparisons to Crystal Castles and Ponytail. It's loud. It's squelchy. It sounds like being off your face which is probably the optimal way to listen to them. You can stream Whatever on Spotify. The show (doors 11:30) also has Extreme Animals, Nike7Up, and a DJ set from True Womanhood so be ready to go all night.

It's a fun night of dancey electronic music when those Kitsune folks (they of the many Maison compilations) bring Gigamesh, Plastic Plates, Computer Magic, Perseus, and JDH to Santos.

Norway's Datarock play the Studio at Webster Hall, part of their "Four Shows on Three Continents in One Week Tour" where they played Norway Wednesday night, NYC Friday, Mexico on Sunday and Columbia on Wednesday. Which sounds tiring to me, but these guys are always silly fun.

And that's what's what for TWII. Tour dates, streams and flyers are below.