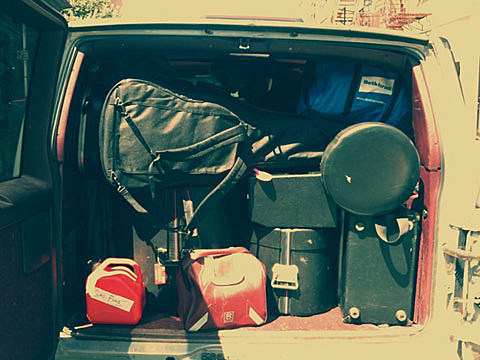 In the wake of celebrating its one-year anniversary last month, Littlefield is beginning to host some pretty decent artists. Take Sunday night's show at the Gowanus venue. Only a modest crowd made it out, but the evening was filled with beautiful and haunting melodies.

First up was Norwegian singer-songwriter Silje Nes. On her debut album, Ames Room, Silje's soft and airy vocals are often overshadowed by the layers of sound she creates, but at Littlefield, they rang out against the gentle notes of a violin and and her guitar. As with other Scandinavian groups like múm and Seabear, shy stage banter and whimsical sound effects factor prominently into the mix. Lyrics of gardens, birds, the sun, and the sky only increase the charm value.

Silje Nes' sound is beautifully understated. Her percussionist in particular is a master of subtlety. He had at his disposal: a tiny xylophone, sleigh bells, wooden blocks, and a miniature accordion of sorts. At one point, he seemed to rub something against his own arm hair to create the scratchy sound characteristic of old recordings.

In addition to playing a handful of songs from her 2007 album, Silje played some newer songs, including "Crystals," which will be on an album her upcoming album, Opticks, due out in September.

Following such a quiet set by Silje Nes, the contrast of Inlets' opening song, "Canteen" was initially a bit jarring. The volume level in the room spiked, and Inlets seemed to possess more self-assurance-- even when, early in the show, front man Sebastian Krueger stopped mid song, saying, "I'm already upset with how out of tune that note is." Like Silje Nes, however, Inlets benefits from lovely group harmonies. The addition of Ben Lanz on trombone also helped to punch up the set.

As DM Stith settled in to play and introduced himself, he suddenly interrupted himself, saying, "I can still hear Gorillaz. Am I the only one?" After the faintly playing house music had indeed stopped, Stith began to set up his first song with a series of claps and snaps that he looped together to create the percussion.

The audience was quite respectful throughout the evening. The presence of seats and the relatively small size of Littlefield made for quite an intimate show. Besides the unintentional rumble of the snare drum during part of Stith's set, the only noise culprit turned out to be not the crowd, but the blasting A/C (though I suppose that's better than the oppressive heat that takes over many other Brooklyn venues in the summer).

Following a Sparklehorse cover, Stith invited the Osso string quartet to occupy the empty seats that were on the stage, and members from Inlets to share the stage with him. Given the fact that the quartet has also worked with fellow Asthmatic Kitty artist Sufjan Stevens, I guess their presence on Sunday shouldn't have been too unexpected, but it was still a welcome surprise. With the addition of all the extra musicians, DM Stith'a set took on a fuller sound for a couple of songs, though his haunting falsetto was still rightfully a major presence. Stith's vocals may be slightly off-kilter, but his voice is rich and eerily compelling.

Like Silje Nes, DM Stith also showcased a new song and revealed that he is working on an album that will be inspired by 50's pop and country music.

If you missed the NYC shows at 92Y Tribeca and Littlefield, you're in luck. The whole line-up will be back at Joe's Pub on July 21st following their tour. I'm already making plans to attend.

From now until that Joe's Pub show, you can catch the three artists on tour together. Their other stops include the NXNE Festival in Toronto, Spaceland in LA, the Black Cat in DC and many other places... but maybe not Portland.

Two new DM Stith videos, and DM's and Inlets' setlists from Littlefield, below...