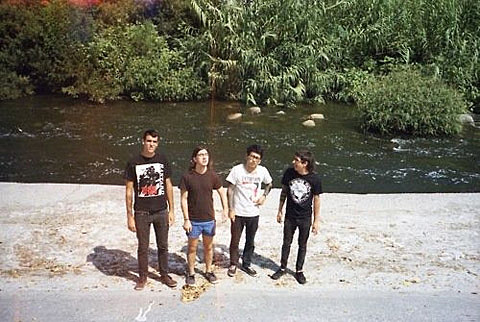 Despite the awesome performance by Code Orange Kids (who rule, and just played Acheron), I'm still a bit bummed that DNF had to cancel our Thrasher Deathmatch show (which happened in Austin during SXSW).

The quartet, which features members of Trash Talk & Touche Amore, weave feedback-laced venom into sludge, hardcore and grind on their debut EP Hurt, out TOMORROW (4/17) via High Anxiety / No Idea. Stream all of that release below. Recommended for fans of Trash Talk and negative, uber-pissed off hardcore/grind. The EP is just a teaser for upcoming material according to the band, so we'll let you know when more material starts to surface.

If you're in the Los Angeles area, do not miss DNF when the band plays Self Help Graphics on April 27th with an embarrassingly impressive lineup of Lack of Interest, Weekend Nachos, and ACxDC.

DNF's label High Anxiety is run by Chris Colohan of Burning Love/Cursed/etc, in conjunction with Var Thelin of No Idea. Chris's band Burning Love will be touring in the coming months and hitting NYC twice. First at Acheron on April 29th with the mighty Salvation (who have an amazing new EP on Youth Attack), Shoxx (members of Pollution & Nomos) and Old Wounds and then again as part of the Southern Lord mega-tour with Black Breath (who played the BV-Power of The Riff SXSW showcase), Enabler (them too), Martyrdod (!), and more TBA. The band will release the Black Widow 7" via No Idea at the end of April.

All Burning Love tour dates and that DNF EP stream is below.