DOWNLOAD: The One AM Radio - "An Old Photo of Your New Lover" (Dntel Remix)
DOWNLOAD: Dntel - "After Parties" (MP3) 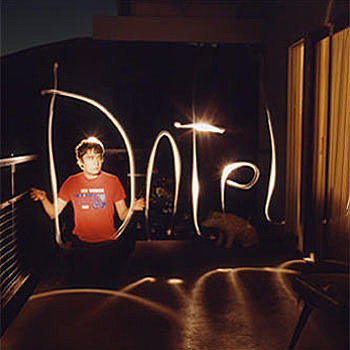 Jimmy Tamborello, better known as Dntel (or perhaps even better known as one half of The Postal Service), is going on tour this summer with The One AM Radio and Geotic. That tour includes Music Hall of Williamsburg on August 18 . Tickets for the Brooklyn show go on sale Friday (6/10) at noon. All dates are listed below.

On July 5th Dntel also plays a one-off LA show with Seefeel who will be on a rare but short US tour that also visits NYC.

Back at the end of 2010 Dntel released some stuff via his label Sub Pop who also promised more coming soon. They wrote:

On Dec. 7th, 2010 we are releasing new music from Dntel in the form of a pair of companion EPs, entitled After Parties 1 and (very sensibly, given their complementary relationship) After Parties 2. These two EPs collect 8 new Dntel tracks (3 on After Parties 1 and 5 on After Parties 2) which are a bit more minimalist and experimental in nature, all of them instrumental, and feature (to the best of our "knowledge") a list of guest contributors numbering exactly zero. These 8 new tracks are also, we are able to discern even through the mist of biases both personal and professional, really something special.

It is worth mentioning here that at some as-yet-undefined point in 2011 we will be releasing an expanded reissue of Dntel's 2001 full-length Life Is Full of Possibilities, which is not only a great record, but notable for, among a great many other things, including the collaboration between Ben Gibbard and Jimmy (on "(This Is) The Dream of Evan and Chan") which led to the formation of The Postal Service.

Ben is also doing some touring this summer, recently played Bowery Ballroom, and was on Conan last night.

The One AM Radio released Heaven is Attached by a Slender Thread back in April via Dangerbird. Dntel remixed the track "An Old Photo of Your New Lover" which you can grab above along with "After Parties" from the Dntel EPs.