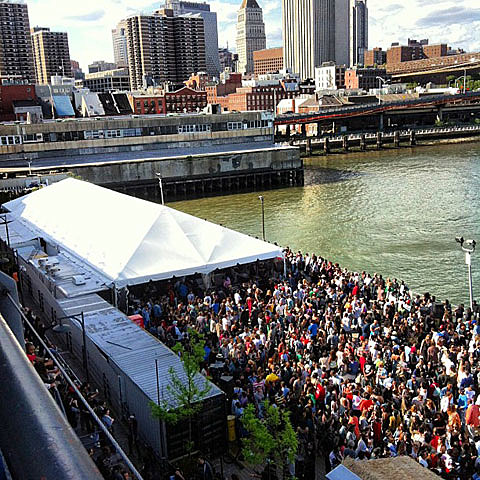 Due to limited paying-attention-to-the-internet over this holiday weekend, we didn't realize until it was too late that Red Bull Music Academy's Do-Over party was moved from The Well in Brooklyn to Beekman Beer Garden in Manhattan on Sunday. Doors were at 2pm that day and they announced the venue change via email at 9:15am (and tweeted it even later).

As you can see in the picture above, the change didn't affect attendance at the outdoor South Street Seaport bar though. DJs, most of them surprises, included DJ Dezandres from Detroit, DJ Seano, Rhettmatic, Shlohmo, DJ Rob Swift, Onra, DJ Dynamix, and RBMA Particpants Emufucka & Trancemicsoul. If you were there, how was it?

Though we haven't looked into it, our guess would be that the Well was really trying to get it together, but just wasn't ready to re-open yet. UPDATE: The Well tells us they were in fact ready to open and that it was Red Bull who changed the venue that morning.

The Bushwick venue's "2013 Season Opener" is currently scheduled for Sunday, June 9 with Lee Burridge. We're rooting for them.

Beekman Beer Garden meanwhile, though open every day, also doesn't have much on their schedule aside from a concert by jam band moe. in June.