Revenge of the Mekons 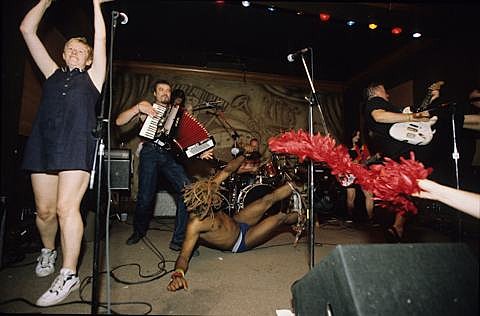 Doc NYC is a weeklong documentary film festival which happens at IFC Center and SVA Theatre from November 14 - 21. Amongst the many films screening that week, a number of them are music related. Revenge of the Mekons makes its world premiere at Doc NYC and dares to chronicle the nearly 40-year career of these punk-and-beyond legends. You can watch the trailer below. The premiere happens November 15 at the SVA Theatre (9:45 PM) and there will be a Q&A after the film with director Joe Angio and the Mekons band members, moderated by Greil Marcus. Tickets are on sale. If you'd like to go for free, we're also giving a pair away. Details below.

Other music documentaries include:

The Punk Singer, which follows Kathleen Hanna from her self-imposed exile from music in the mid-'00s through the start of her new band, The Julie Ruin. It screens at the SVA Theatre on 11/16 at 7:15 PM (tickets). Hanna is expected to attend.

20 Feet from Stardom, about back-up singers behind some of the biggest names in music. It screens at the IFC Center on 11/13 at 7 PM (tickets)

Death Metal Angola</em> which tells the story of a couple who raise awareness and funds for an Angolan orphanage by organizing the country's first-ever national rock concert. It screens at the SVA Theatre on 11/16 at 9:45 PM (tickets).

Marvin Hamlisch: What He Did for Love, which is about the acclaimed composer and songwriter who died last year. It screens at the SVA Theatre on 11/17 at 6:45 PM (tickets).

You can check out the full list of music documentaries being shown here, and the entire slate of Doc NYC programming and schedule.

Trailers for most of the films mentioned above (minus the Hamlisch one), along with contest details, below...

Revenge of the Mekons

======================
For a chance at winning a pair of tickets to see 'REVENGE OF THE MEKONS' AT SVA THEATRE: either tweet something that includes both @BrooklynVegan AND "MEKONS DOC" in the tweet, or send an email to BVCONTESTS@HOTMAIL.COM with the subject line "MEKONS DOC". Include your first and last name in the email. We'll pick a winner at random and contact them with more details. If you enter by email, it will not be shared with anyone else. Good luck!
======================