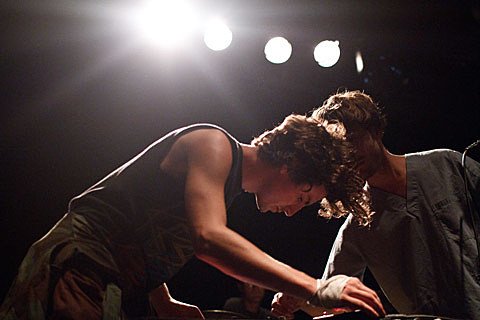 As mentioned, Doldrums (the project of Airick Woodhead) and Moon King (the project of Airick's brother/collaborator Daniel), who were both just in NYC will return for CMJ. We already know that Doldrums will be playing the Windish showcase at Mercury Lounge on October 17 with Hundred Waters, Strange Talk, High Highs, Mozart's Sister, and more (tickets).

It's now been announced that Doldrums and Moon King will team up for the M for Montreal CMJ showcase on October 19 at Arlene's Grocery. Mozart's Sister (who also shares a bill with Doldrums at the Windish showcase) is on the bill, as is Braids side project Blue Hawaii. The rest of show includes ex-DD/MM/YYYY krautrockers Absolutely Free, Royal Canoe (who are going on tour with Savoir Adore), impressive live dance rock outfit Plaster, TOPS, and Ariane Moffatt. No advance tickets for this one at the moment. You can also try to get in with your CMJ badge.

M For Montreal set times along with a list of all Doldrums dates and a song stream are below.