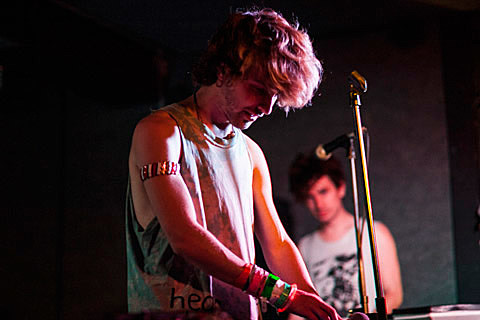 As mentioned, Austra scheduled a few North American shows later this year including a NYC show on September 19 at Music Hall of Williamsburg. Tickets for that show are still available. All dates are listed below.

Since we last spoke, fellow Canadians Doldrums and Brooklyn's Zambri (who joined Bear In Heaven on stage last month at a MHOW show which Doldrums opened) were added as openers to Austra's MHOW show. The connections don't stop there though. Main Doldrums guy, Airick Woodhead, and his brother Daniel who sometimes drums live for Doldrums and has his own project called Moon King, were both members of the band Spiral Beach, whose lineup also included current Austra bassist Dorian Wolf.

Speaking of bands that include Austra members, TRUST (featuring Austra drummer Maya Postepski) have upcoming dates with Light Asylum, including two in NYC: Warm Up at PS1 on 7/7 with Nguzunguzu, Arca, and Todd Terry (tickets), and MHOW on 7/8 (tickets). All dates are listed below.

Doldrums is also a Grimes collaborator, has toured with her multiple times, and it looks like they're probably also good friends. Daniel Woodhead, in addition to sometimes drumming for Doldrums, drummed for Grimes too sometimes on her recent tour. Grimes has a lot of NYC shows coming up, including four sold out shows and a free one at River Rocks on Pier 84 on August 9 with Wild Nothing and DIIV.

Doldrums will also be in NYC next month for 4Knots Music Festival.

Daniel Woodhead's Moon King project does not have any upcoming NYC appearances at the moment, but he was here a good amount of times last year, including when he played with Dope Body and Hume last summer. Hume just played the official BV Northside showcase. Hume and Dope Body's friends Roomrunner just played Cake Shop and have other NYC shows coming up including one this Friday (6/22) at the Bell House with Diamond Rugs and Richard Buckner, and a free show with Dan Deacon and John Maus at Pier 84 on July 12.