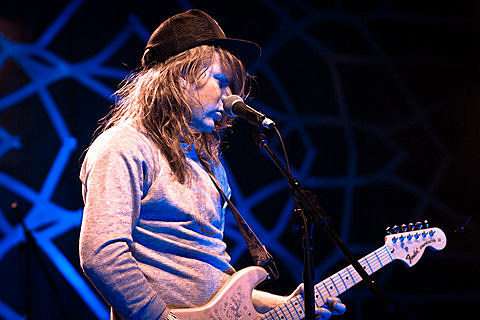 Sometime this year DOM ceased functioning as a band and Dom, the frontman, is now recording music under the moniker Kiss 1O8. Why the name change? He recently talked about it to Exclaim:

I chose the name Kiss 1O8 after Kiss 108 FM, a pop radio station I used to listen to as a kid. That and 108 is a sacred number in some cultures, as it represents one, nothing and everything. When I hear 'Stargate,' I don't immediately think of the '90s sci-fi soap, I think of two bald men from Norway. To be honest, I don't really care what Ryan Seacrest or anybody else thinks about it.

The name change also marks a radical shift in musical styles, saying Kiss 1O8 is "more like Streets of Rage versus S Club 7, on some maximalist level." You'll be able to hear that for yourself when Dom releases Kiss 1O8's debut, HYPERFANTASY XL LP, on Halloween (10/31). You can stream a track from it below.

There's a listening party for the record happening before that at Le Poisson Rouge on October 29 featuring DJ sets from Kiss 1O8, Pictureplane, Ollie Sabin (Unicorn Kid), Devin Perez (DIIV), John Rambo and "Super Secret Guest TBA." The listening party is free but you do need to RSVP by sending an email to RSVP@newtownradio.com.

Flyer for the show and the track stream below...