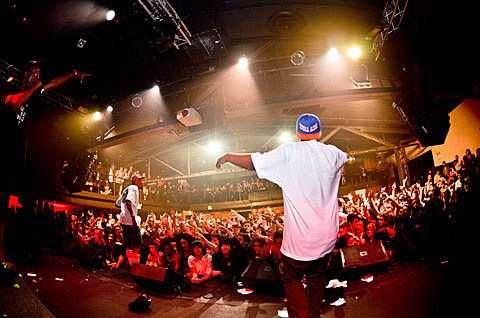 When some 20,000 concertgoers arrive at Union Park on July 16 in the middle of this summer's Pitchfork Music Festival, they'll be greeted by members of several Chicago groups dedicated to raising awareness about domestic violence, sexual assault, and violence against gays, protesting that day's booking of controversial rappers Odd Future

This blog [at WBEZ] first asked the question "Pitchfork & Odd Future: Endorsing rape or showcasing art?" in a post on May 2nd that featured extensive comments from festival and Web site honchos Ryan Schreiber and Chris Kaskie, who defended the booking. The interview generated considerable comment here and elsewhere, from people disgusted by the hateful lyrics from the much-buzzed underground rappers dedicated to shock and outrage, as well as from their fans and boosters.

However, Pitchfork rejected a request by Rape Victims Advocates for space inside the fest to present their views, saying that all of the booths for non-profit organizations already had been assigned. And this blog still is waiting for comments from the most notable female performers sharing the weekend's bill with Odd Future: Merrill Garbus of tune-yArDs, Neko Case, and electronica musician Ema.

Yesterday, Between Friends, a nonprofit agency with a 25-year history "dedicated to breaking the cycle of domestic violence and building a community free of abuse" announced that it will be taking to the West Side streets around Union Park, handing out 5,000 cardboard fans "with a powerful message about violence against women and resources listed on them" resulting in "a sea of fans cooling down concertgoers while hopefully getting them discussing the issue and knowing where to turn for help."

The group, which presents educational programs at schools and community centers, frequently makes use of music to illustrate the plague of violence against women--witness its video below juxtaposing Rihanna and Odd Future hero and progenitor Eminem--and some of its leaders regularly attend the Pitchfork Festival, which usually takes pains to be the most socially conscious and community-oriented of Chicago's big musical celebrations. Pitchfork booking Odd Future is not unlike Whole Foods deciding to sell fried Twinkies, factory-bred chicken, and tuna with 10 times the mercury content.

"It's contrary to what they stand for," said Between Friends Programs Director Yesenia Maldonado. "We do respect the fact that they have the right to have the music that they feel people are interested in at their fest. But we'd like to make sure that they have the resources available while they're there. This is a huge venue and we really want for people who haven't heard these shocking lyrics--maybe they're coming for another band and this is the first time they'll be hearing [Odd Future]--we want to make sure that we let them know that this is something that we're taking notice of, and we really want to get the other view out there as much as possible."" -[Jim DeRogatis]

Tickets for the 2011 Pitchfork Festival are still available. The full Pitchfork lineup and schedule and the Between Friends PSA below...

Between Friends PSA from Wicked Truth on Vimeo.