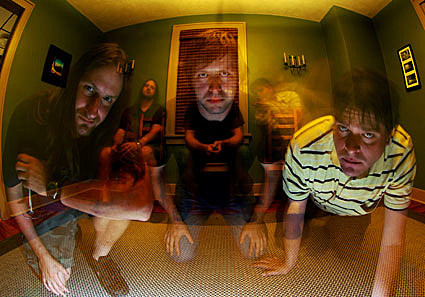 Punkgasm is out now, and it marks record number two for the revamped Don Caballero lineup with members of Cretia Bourzia. Check out "Lord Krepelka" and "Bulkeye" above and check Don Caballero out on August 23rd (Saturday) at the Knitting Factory with An Albatross, Ponytail and WFMU DJ Marty McSorley. Tickets are still available.

Back in 2003, when original member Damon Che decided to reform Don Cab, he reached out to former members Mike Banfield and Pat Morris to see if they wanted to participate. Both declined. Both are showcasing their new bands at Mercury Lounge in NYC September 1st. Tickets are at the door. Tropic Of Nelson is also on board.

Pat Morris is in The Poison Arrows who are knee deep into EP number three (Casual Wave was released on August 19th on File Thirteen Records). Check out the title track above, as well as a track from each from their two previous EPs.

Knot Feeder, featuring Mike Banfield, haven't updated their MySpace blog in a while, but they made it known that they recorded six tracks with J.Robbins at his studio Magpie Cage for an upcoming full-length in December, and that they were finishing it some time in February.

Of course, Ian Williams was also a member of the pre-2003 Don Caballero. He is plugging away at a little band called Battles and they recently played Central Park Summerstage.