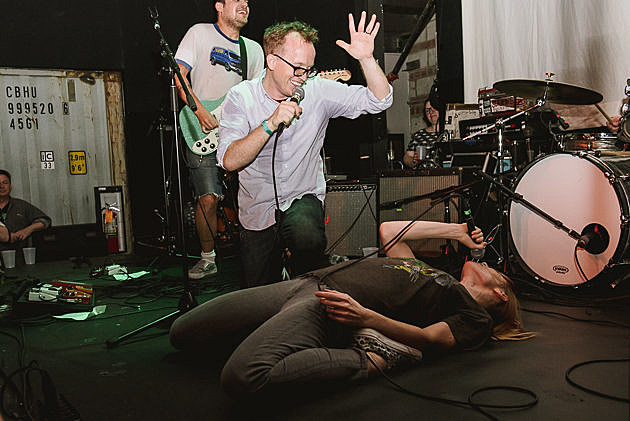 Like in past years, several Don Giovanni Records artists have given us lists of their favorite music (and more) of the year. This time we've got lists from Downtown Boys (who, amazingly, include the blink-182/Drake mashup), Screaming Females, Tenement, Izzy True, Shellshag, Worriers, Mikey Erg, Vacation, Aye Nako, Roadside Graves, comedian Chris Gethard, and label co-founder Joe Steinhardt. Check out all of their lists below. Chris Gethard's two-item list has especially entertaining commentary.

Downtown Boys also just announced a tour with Sheer Mag, who are on their list.

Jarrett Dougherty (Screaming Females)
11 Releases That I Listened To A Lot This Year That Came Out This Year, In Alphabetical Order (like MTV12):

Joey Bada$$ - B4.DA.$$
Buck Biloxi and The Fucks - Streets of Rage
Evan Caminiti - Meridian
Courtney Barnett - Sometimes I Sit And Think, And Sometimes I Just Sit
The Coneheads - L.P. 1 (who's got my copy?)
Alessandro Cortini - Forse 3
Downtown Boys - Full Communism
G.L.O.S.S. - Girls Living Outside Society's Shit
Shellshag - Why'd I Have To Get So High?
Sleater-Kinney - No Cities To Love
Vacation - Non-Person

Chris Gethard
"Many great albums came out this year. It would be too insular and easy to make a whole list of Don Giovanni releases, since Screaming Females, Worriers, Mal Blum, Laura Stevenson, Shellshag, Tenement and so many more made me proud to be a part of this label. And as a true born son of New Jersey I support anything The Front Bottoms do.

That being said, there are two albums that came out this year that I think rank among my all time classics, albums that I assume I will play many times for my children and that helped me rethink how I approach my own art. I'm not exaggerating. These two rearranged my DNA a bit -

1. Jeff Rosenstock - We Cool? - First off, catchy. Secondly, you can't hum a few bars of any song on this album without having it stuck in your head all day. This is a process known as "Being Rosenstocked". You can also Rosenstock someone by singing a chorus from any of these songs in front of them and watching them have it stuck in their heads all day. His songs are so catchy his name is now a verb. Third and most importantly - no album has previously captured so well what it's like to grow into your thirties, hanging on to your dreams while wondering if you should instead just go and be an adult. I think a lot of people in their twenties enjoy this album right now because it's awesome and fun and Weezer-ish at points and you can sing along to it, but as someone who turned 35 this year it's actually sad and poetic and chilling.

2. Hamilton: The Original Broadway Cast Recording - I know I'm supposed to be cool and stick to the pop music, but this shit rules so hard. Also, if you think of punk as smashing conventions and expectations on how to do things - to constantly wonder why things have to be the way they are - this is the punkest thing that's ever happened. A hip hop Broadway musical where minority actors play white founding fathers and just doesn't make sense and never feels gimmicky but actually feels like this story HAD to be told this way? Sign me the fuck up. Lin Manuel Miranda is the 2015 Joe Strummer. Dear Theodosia is the new Blitzkreig Bop. Leslie Odom Jr is Broadway's GG Allin. Quote me on all this.