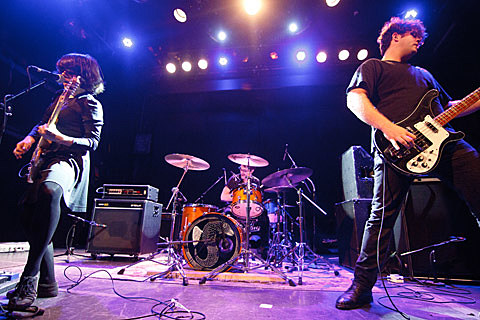 We've been asking around for artists to tell us their favorite albums of 2013, and the people at NJ punk/indie rock label Don Giovanni Records sent over some lists from a few of their artists. At the bottom of this post, you can browse the lists from label co-founder Joe Steinhardt (also an artist on the label as Modern Hut), DC post-punks Priests, eclectic Brooklyn duo Shellshag, Amherst sludge rockers California X, Wisconsin punk rippers Tenement, Hilly Eye, Lauren Measure's new pop punk band Worriers, and Marissa Paternoster, the shredder/vocalist of Screaming Females (and also the brains behind Noun). One major trend on the lists is that the self-titled debut from Radioactivity (the new band of The Marked Men's Jeff Burke and Mark Ryan) appears more than any other album. If you haven't heard that one yet, you can stream it below.

As discussed, most of the bands mentioned will be playing the Don Giovanni showcases happening in Brooklyn on February 6 at 285 Kent and February 7 and 8 at Music Hall of Williamsburg. Tickets for 285 Kent and MHOW (including a 2-day pass option) are still available.

Lists and streams below...

ovlov-am A very good band from Connecticut. We first met them in Boston and Steve was wearing a cap I think. This is a guitar band.

potty mouth-hell bent We tried to set up and show with Potty Mouth on Cape Cod once but it didn't work out. If you walk into our backyard eventually you'll get to a graveyard. Exit the graveyard and walk across the street and you're at Abby's house.

swearin'-surfing strange I was in new york once and from somewhere behind me I heard "Hey Fucker!" I turned around and it was Jeff. It was nice to see his smilin' face. The first time I met him we walked to the liquor store together and he showed me how much he liked Fireball.

radioactivity-s/t We all really like The Marked Men so this was an exciting thing to hear in 2013.

windhand-soma I listen to this everyday when I get out of work and every time I drink beer.