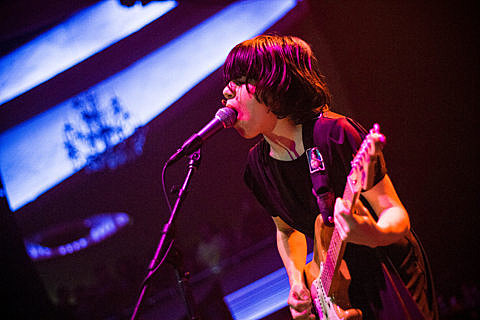 In related news, Screaming Females are releasing a cassette of home recordings this weekend (2/10) and you can stream the whole thing ahead of its release at Pitchfork. It features the track "Green Vapors," which was done with DG labelmates Shellshag.

Laura Stevenson is also releasing a new album, Wheel, on April 23 via Don Giovanni. You can stream the lead track, "Runner," at the bottom of this post.

Meanwhile, if you miss the showcases this week (or just want more), three of the bands playing -- Black Wine, Hilly Eye, and Nuclear Santa Claust -- are teaming up again for a NYC show at Cake Shop on March 23 with Lauren of The Measure. Admission for that one is $8 at the door.

If you're going to the DbA showcase tonight, be sure to catch California X, who have a new guitarist, Zack Brower and tonight is his first show with the band.

And in even more related news, Miranda Taylor of Black Wine just interviewed Caroline Rue, Hole's first drummer, who played on their 1991 debut, Pretty on the Inside. Here's an excerpt...

The evolution of Hole's sound is, in my opinion, extreme. What do you think contributed to the sound/style changes over the years?

Well, first off, Courtney and I were the least skilled musicians and needed time to catch up with Jill and Eric. We hung out, listened to records, and they turned me on to the Pixies, which I had only seen the MTV video for "Here Comes Your Man." We became better players, so we were starting to refine our tool to do what we were intending.

And you can read the rest at Miranda's blog.