"At the Don Giovanni records showcase rn. These are some damn good bands, and DG is exhibit A of what a punk label should be." - @Lowry_Phil 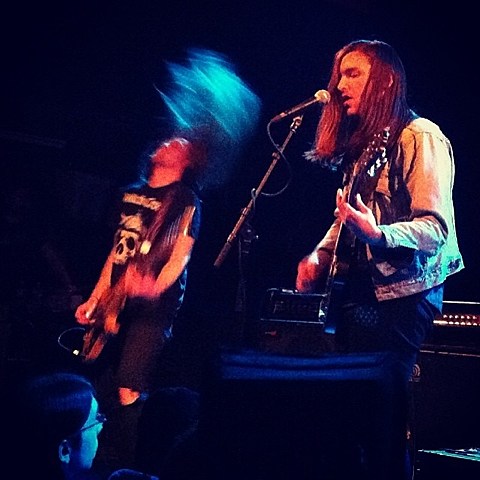 New Jersey's Night Birds followed Vacation with their first performance together in three months. New dad Brian Gorsenger didn't look like he'd lost any of his usual energy and aggression during the hiatus. By this point, the mosh pit was going full-throttle. Beer and beer cans continued to fly overhead, and Gorsenger had fans screaming the choruses to "Born to Die in Suburbia" and "Maimed for the Masses" into the mic right along with him.

Wisconsin's Tenement closed out the evening. In contrast to the abbreviated set the band played at Asbury Lanes back in September, last night they pulled out all the stops. The set ranged from classic-rock inflected punk to extended instrumental drones. Guitarist Amos Pitsch brought along a case filled with paraphernalia that included duct tape, a tambourine, and bells. He rolled the tambourine over to a fan in the front row. He duct-taped the strings of his guitar to the fingerboard, jingled bells in both hands, and even played guitar using a full can of beer as a slide. As the band unplugged their instruments at the end of the set, cries went up for one more song; and, after a few moments, the band obliged setting the pit roiling one, final time. [Speak Into My Goodeye]

NJ punk/indie rock label Don Giovanni Records put on their annual Brooklyn showcases last week, kicking off at Death by Audio this past Thursday (2/6), and continuing with a two-night stand at Music Hall of Williamsburg on Friday (2/7) and Saturday (2/8) with five bands each night. The above review is of the DbA show which included sets by Tenement, NIght Birds, Vacation and more, and the MHOW shows had sets by Screaming Females, Laura Stevenson, California X, Nude Beach, Priests and still many more. If you went, how was it? A short video of Cali X's set is below.

California X have other upcoming shows, including another NYC show happening on March 14 at Shea Stadium with solid local support coming from Sleepies and LVL UP. That's a good option if you're staying in NYC during SXSW this year. Tickets go on sale today (2/10) at noon. All upcoming Cali X dates are listed below.

As discussed, Vacation's tour includes another NYC show TONIGHT (2/10) at Cake Shop with Nancy and Flykills.

Night Birds open for The Queers when they play Love Songs for the Retarded in full at Mercury Lounge on Saturday (2/15). The Scandals are on that show too, and tickets are still available. Before that, they'll play an instrumental set as Killer Waves at Grand Victory on Thursday (2/13) with garage rockers Shocked MInds and Foster Care.

Priests have multiple upcoming shows too.

All Cali X dates are listed, along with that clip, below...