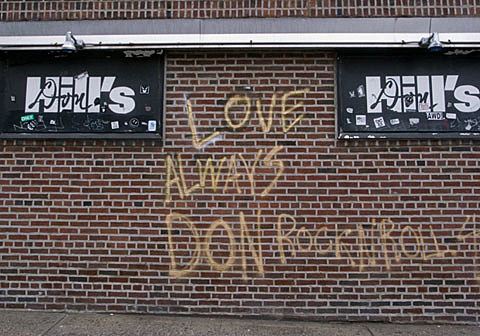 "Just weeks after the sudden death of nightlife fixture Don Hill, his eponymous SoHo club closed its doors for good Monday night. Don Hill's was reopened in September by Nur Khan and Paul Sevigny, and on Saturday drew Julia Roberts and Danny Moder for a Tribeca Film Festival after-party for "Jesus Henry Christ." But Khan told Page Six that the one-story building will be turned over to developers. Public records identify the current owners as TriBeCa-based Ponte Equities. Khan said, "After the unexpected passing of Don Hill, there was no doubt in my mind about continuing his legacy by bringing in incredible talent over the last year, such as Iggy and the Stooges, the Kills, the Yeah Yeah Yeahs, as well as nurturing younger talent. Don Hill was loved by the community. Unfortunately," he added, the property offered a "moneymaking opportunity unconcerned with preserving Don's legacy. I will be sad to see the doors close as it was such a passion project for me." Ponte Equities didn't return our calls."

According to a 2002 Observer article, Ponte Equities is "one of downtown's oldest family-run landholding companies." I don't know or understand completely what the contractual/owner relationship was between Don, Nur, Paul and Ponte Equities, but Eater adds:

"The rock and roll club never seemed to break through a very crowded marketplace, and in an ominous sign, basically skipped Fashion Week when it rolled back around in 2011. Then came the news the Don Hill passed away last month. At a party held that night in his honor, Khan and Sevigny promised those gathered that the party would roll on, but apparently not for long. According to a tipster, the rent hasn't been getting paid and the landlord went and changed the locks, telling the club owners he will be tearing the building down.

Maybe Khan and Sevigny are stretched too thin by running a restaurant and a Los Angeles nightclub. Maybe the landlord was willing to look the other way for his recently deceased longtime tenant on back rent but not the new partners. Or maybe the crowds that once populated the Beatrice Inn, Rose Bar and Sway have moved on and were never replaced."

Right after Don's death, Steve Lewis somewhat predicted this when he wrote...

"In an age where bottle service pays the bills, greed might win out. Paul and Nur will do their best, no doubt, but death brings vulture--types who feed on despair and confusion. They may have other less fabulous ideas about the property. We must support the legacy of Don Hill, and maintain one of the few places in town where guys like him and I could actually hang out. Don Hill was a gentleman, and that's the greatest compliment I have about a fellow."