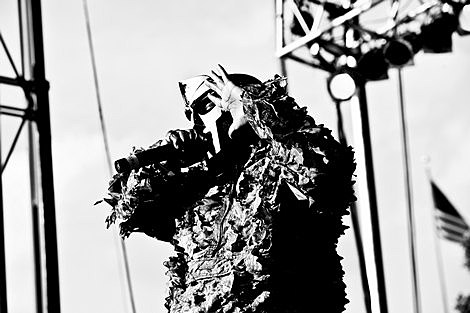 "[In response to why he wears a mask]...A visual always brings a first impression. But if there's going to be a first impression I might as well use it to control the story. So why not do something like throw a mask on?"

Or throw the mask on someone else Dumile routinely sends out one of his comrades in the DOOM costume and has him lip-sync the entire show. He sees this as a logical extension of the DOOM idea. Fans who have paid for tickets tend to disagree.

If Dumile had his way, he would take it further. He jokes that he'd like to dart backstage after a performance, take off the mask, and then wade into the crowd - beer in hand - and applaud his own work in conversations with strangers, if the subject of DOOM comes up, Dumile will simply play along, like Peter Parker or Bruce Wayne.

DOOM (or one of his stand-ins...) will be on hand for a headlining show at NYC's Nokia Theatre Times Square on Saturday, January 30th. Tickets go on AmEx presale Wednesday, Nov. 4th at 10am. General sale starts Friday, Nov. 6th at noon.

The show will also feature a performance by Mos Def, a rumored guest on the forthcoming follow-up to 2004's Madvillainy, which will come out (date unknown) on Stones Throw Records. The NYC gig one of two currently on the schedule for DOOM. The other is a Madvillain set at L.A.'s We the People Festival.

Tracks allegedly from the new Madvillain record were recently leaked on East Village Radio's Fat Beats Live. A YouTubed clip of those are below.

DOOM is also set to release a new disc of "rare non-album tracks and guest appearances" called Unexpected Guests, which comes out November 10th on Gold Dust. A preview trailer for that mix is below, and its first 15 minutes are streaming at Doom-UnexpectedGuests.com.

DOOM's Madvillain collaborator Madlib is busy, as always, with plenty of other projects. DOOM played Pitchfork Festival earlier this year in July.

Previews and tour dates are below...