Doomriders at House of Vans in 2012 (more by Fred Pessaro) 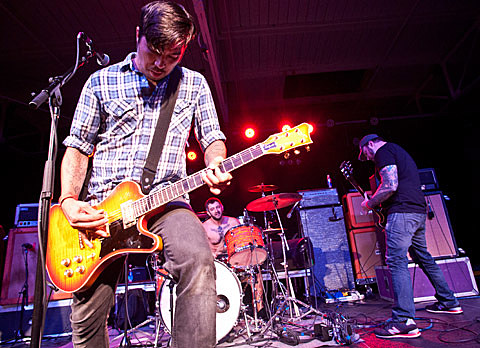 Doomriders are set to release their new album, Grand Blood, on October 15 via Deathwish and they just released a new single from it called "Dead Friends." It's pretty straight-forward party metal/rock, if a tad lighter on the melodic-guitar work that marked earlier Doomriders material. You can check it out below.

Doomriders were last in NYC when they played 285 Kent with Red Fang, who just announced a tour which hits NYC at Bowery Ballroom on 12/11. They also just released a new song, which you can stream below.

Doomriders return to NYC when their tour with the mighty High on Fire and Norwegian beer/sweat black-'n'-rollers Kvelertak hits Webster Hall on November 15. Tickets for that show are still available.

Doomriders frontman and guitarist Nate Newton does double duty as the bassist in Converge. Another Converge-related band, Mutoid Man, just announced a NYC show. The trio (aka Converge's Ben Koller, Cave In's Stephen Brodsky, and Brohammer's Nick Cageo) will hit Saint Vitus on Monday (9/23) with Godmaker, Descender, and DJ Jim Carrol, (The Suicide File, The Hope Conspiracy). Tickets for that show will be available at the door.

As discussed, Stephen Brodsky is playing his own Brooklyn show at Union Hall on Friday (9/20) with Jenny Owen Youngs and Mal Blum (tix). He's also since announced another show happening at Silent Barn on October 2 with Wing Dam and Me You Us Them.

Meanwhile, speaking of Kvelertak, they just released a psyched-out cartoon video for "Evig Vandrar," a song from their sophomore album, Meir, which came out earlier this year. Check it out below, along with the full list of High on Fire/Kvelertak tour dates, which also include support at select shows from Windhand (who recently played Saint Vitus) and Pack of Wolves...