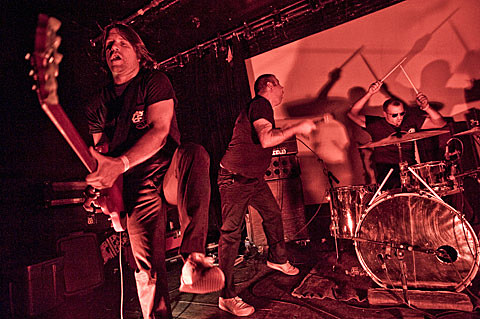 You know who these men are. They have been other men.

Who they were before does not matter. What matters most is who they are now.

These men, with two menacing guitars, violent drums, and wild words will control your thoughts. They will build bunkers out of your bones. They will make weapons out of your teeth. They will drink your tears and feed on your meat.

Doomsday Student's identity is confirmed as mostly ex-members of Arab on Radar and like that band, the foursome practice in noisy spazz freakouts. The band will take their unique brutality out on the road, bringing with them like-minded fellow-Rhode Islanders Tinsel Teeth to class up the joint. The tour starts Friday (7/20) in Rochester, eventually swinging down to NYC to play Death By Audio on July 28th with Unstoppable Death Machines and Sweet Tooth.

Full tour schedule is below, plus video of of Doomsday Student playing from 285 Kent in April, and Tinsel Teeth (NSFW) at DbA last summer.

"Ape in Love" by Doomsday Student from Filmpaws on Vimeo.