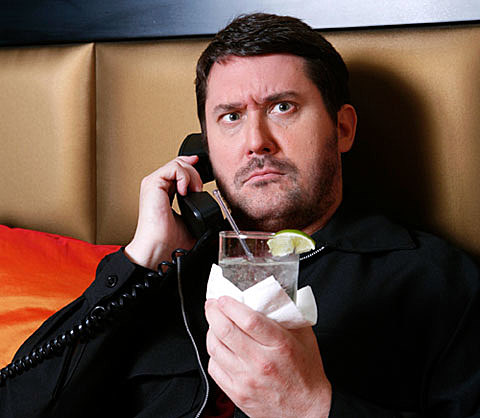 As previously mentioned, Doug Benson, Rob Cantrell, and Tony Camin will hit the Gramercy Theater this Saturday 12/18 at 4:20pm for the magnificent, doobie-centric spoken-word show The Marijuana-Logues. Depending on who you ask, Doug, who hosts the preposterously hilarious Comedy Central show The Benson Interruption, is probably the most recognizable presence on the panel. But having seen Tony and Rob individually several times I can tell you that they are two of the funniest dudes in the biz and that there is absolutely zero imbalance in the comedy onslaught coming from those three fellas. As a triad, Doug, Rob, and Tony create one of the funnest, funniest atmospheres on the planet. Tickets are still on sale. I cannot recommend this show enough. Last time I saw the 'logues, I laughed so hard I had an asthma attack AND had tears streaming down my face. Plus, you have nothing better to do this Saturday afternoon. Nor is there anything better you could be doing in NYC this Saturday afternoon.

If you are among the 1 or 2 people in NYC who have prior obligations or, Cod forbid, actually found something better to do Saturday afternoon, you may be wailing aloud "I'm going to miss Doug Benson's only NYC appearance!?" Relax, little grasshopper. I have great news. It was just announced that Doug will be returning to the Gramercy Theater that very evening, Saturday 12/18, for a live recording of his infamous Doug Loves Movies podcast. Tickets went on sale yesterday at the oddly specific time of 11:22am (is that another pot number reference a la 420 that I am not hip to?). The show will have special guests, and this being NYC I can promise that they will blow your mind away. Come to think of it, my first ever exposure to Doug Benson was way back when on bobanddavid.com (RIP) where he had a frequent column called I Love Movies. I liked him immediately and will never forgot his tweet-length review (before Twitter existed) "Amelie is as cute as a button. I hate buttons." Follow my example: go to both shows.

In other comedy news, hey San Francisco, Mike Birbiglia is coming to your town. Tickets are on sale for three shows. Grab them before they sell out like every one of his December Union Hall shows did.

We're just one day away from Reggie Watts' headlining show at Highline Ballroom.

Jerry Seinfeld was recently spotted in the crowd of the Apollo Theater.

You can catch Jenny Slate in Brooklyn tonight (12/16).