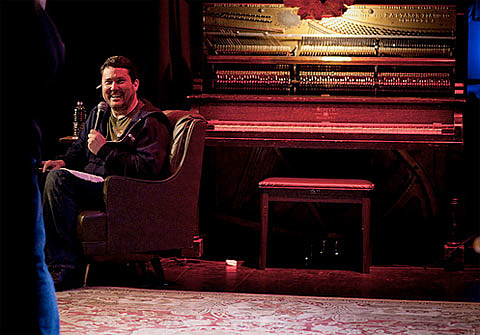 Did you know that The Benson Interruption was picked-up by Comedy Central for 6 half-hour episodes? It premiered on Thursday, October 28 at Midnight (or it hasn't premiered yet if you believe Comedy Central's website), and although I didn't see it, I have seen the live show and cannot begin to accurately describe how funny it is. Essentially, Doug sits on stage (or in the front row) and interrupts awesome comedians as they try to get through their bits. It isn't heckling. It's more like DVD audio commentary that the actors can actually hear and react to. If you're in LA, then you might like to know that The Benson Interruption is taping in your town on November 4th (8:00pm) and November 15th (7:30pm, 9:30pm). Sign up for your chance to be in the audience! I know I would if I was in LA.

On a related note: Personally, I don't smoke weed. I have, and it's ok, but it's just not my bag. I'm a drinker. I am not against weed, however. I've done it, most of my friends do it, and I'd bet dollars to donuts I have family that have done it. For two years I lived with one of the most habitual pot smokers I've ever known. If anything, I think legalizing it could close some weeping gaps in America's hilarious federal deficit; a deficit that's getting so big that we may actually see a new number invented in our lifetime. That'd be awesome. Also, weed is at the source of so many preposterous incarcerations, fines, and expensive legal battles that I think decriminalizing it would benefit Americans of every financial strata and allow the pigs in charge to pursue real criminals.

The worst thing about weed? Weed Culture. Bongs are ugly. Pipes are ugly. The more ornate the glass, the more it looks like Henry Hill's mistress' apartment in Goodfellas. The 420 motif is beyond arbitrary. The clothes the culture generates could ONLY be worn by people who a baked out of their gourds. And the posters. Good grief. The posters. When I hear the word "pot head" my mind simultaneously conjures up two different images of a pot smoker. The first is that of a burrito selling hippy with a lot of baggy corduroy and bright colored shirts and accouterments bouncing around devil sticks and noodle dancing. "Wanna get a hack?" The other pot head archetype my mind conjures up (editor's note: The opinions expressed by Klaus Kinski's mind are not necessarily the opinions of other BrooklynVegan.com minds) the brooding, small town dude who loves Korn, wears oversized black hoodies, baggy dark shorts, and clunky shoes 365 days a year. Pride bothers me. Pride in something as stupid as smoking pot is laughable. Pot smokers are the only people who should follow a don't ask don't tell policy.

"Jesus Klaus. Do you have a point here or are you just using BV as a pulpit for your kind of irrational and basically irrelevant thoughts on weed?" I know, right? But I do have a point. And that is to tell you that the ONLY good thing to come out of weed culture, The Marijuana-Logues, will be hitting The Gramercy Theater at 4:20pm on Saturday December 18th (3:30pm doors). I haven't seen the Marijuana-logues in many years, but the last time I saw the show I laughed like a man under the influence of some serious Big Buddah Cheese brah. What are the Marijuana-Logues? Simply put, it is three men, one stage, many many many stories about marijuana. The line up for the 12/18 show will feature comedians Doug Benson (of the Benson Interruption), Rob Cantrell, and Tony Camin, all of whom a absolutely hilarious. Tickets went on sale on October 15th and are still available, so GET YOURS. Pot heads, straight edges, and squares alike will enjoy the living crud out of this show.

Video of Zach Galifianakis smoking a joint on a recent episode of of Bill Maher's Show, below...