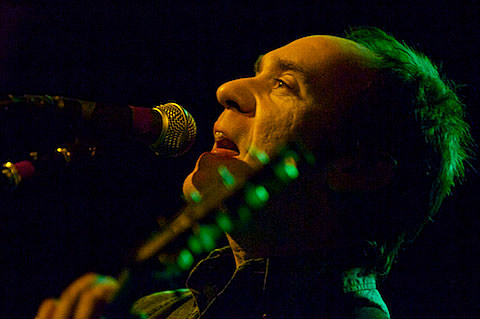 I got heavily obsessed with Guided By Voices after the demise of the "classic '93 - '96 line-up" which featured Robert Pollard, Tobin Sprout, Mitch Mitchell, Kevin Fennell, and Greg Demos (a line-up that reunited in 2010 and has been blazing a sweaty, beer soaked trail across the US since) (this past weekend's Sasquatch Festival included).

I've now seen the classic line-up twice thanks to the reunion, but prior to that my live experience was always delivered by Robert Pollard, Nate Farley, Doug Gillard, Kevin March, Tim Tobias and, later on, Chris Slusarenko. I often had to be rolled out of those shows in a wheelbarrow, and memories of those shows are muddied and schizophrenic, but two things I always took away from a GBV experience was A) that I had had the time of my life and B) that lead guitarist Doug Gillard was, and is, easily one of the most agile guitar gods in rock 'n roll. I mean, forget about shredding and other wanky guitar-athleticism bullshit. What Doug brings to the table is a prodigal level of rock-solid, rock guitar purity and proficiency. Doug is an absolute master of his craft, and you'd be hard-pressed to find anyone out there these days who can get such a thunderous onslaught from his Les Paul and his amps. So it shouldn't come as much of a surprise to find that your man Klaus has been following Doug's solo career with great interest and it is because of non-GBV-related Gillard news that I write to you fine people today.

On Saturday June 4th, Doug will be part of an ensemble of musicians paying tribute to Captain Beefheart at Bowery Poetry Club.

Captain Beefheart died on December 17, 2010 from complications from multiple sclerosis, so it's fitting that ALL PROCEEDS from this show (a reasonable $10) will go directly to The National Multiple Sclerosis Society. If you can't make it to the show, watch the live stream. And consider donating to the MS Society.

Besides the MS/Beefheart show, there are many more opportunities to catch Doug live. Speaking of beef, on Saturday June 11th, get your non-vegan ass to the Big Apple BBQ in Madison Square Park at 1:00pm on Saturday June 11th. While you're feasting on various forms of carrion with gristle and BBQ sauce dribbling from your lips (editor's note: Klaus!), the band Bambi Kino will be performing. Bambi Kino features Mark Rozzo (Maplewood), Ira Elliot (Nada Surf), Doug Gillard (Ex Guided By Voices), Erik Paparazzi (Cat Power) and were formed to celebrate the 50th Anniversary of the Beatles' first concerts in Hamburg Germany. Back in those days, the Beatles were essentially a cover band themselves, and Bambi Kino's setlist is culled from the Beatles' set list from back in those days. So it's like a cover band covering a cover band who were doing their own versions of the whole blues thing. And it's free! More about who's playing the Big Apple BBQ, HERE.

You can also catch Doug when he goes on tour with Tommy Keene and Sally Crewe and the Sudden Moves. Doug recently wrote and recorded songs on Sally's upcoming 5-song EP "Transmit/Receive". Tommy is touring in support of his new LP, and Doug Gillard will have a new vinyl 7" he'll be promoting. The tour lands at the Rock Shop on September 10th, 2011. Complete tour dates below.

Oh, and before I forget... Doug is recording tons of guitar for the upcoming Nada Surf LP, which is due out in Fall of 2011. Look out for that as well as a tour in support of said LP. Nada Surf's Matthew Caws joined Doug on stage at Irving Plaza on New Years Eve when he opened for GBV.

Catch Guided By Voices, Wavves, and Surfer Blood during the Northside Festival on June 18th, yo.

Gary Lucas's other upcoming shows include a July 3rd appearance at Iridium Jazz Club and a July 9th show at the Rubin Museum of Art.

Doug tour dates and the Beefheart flyer below... 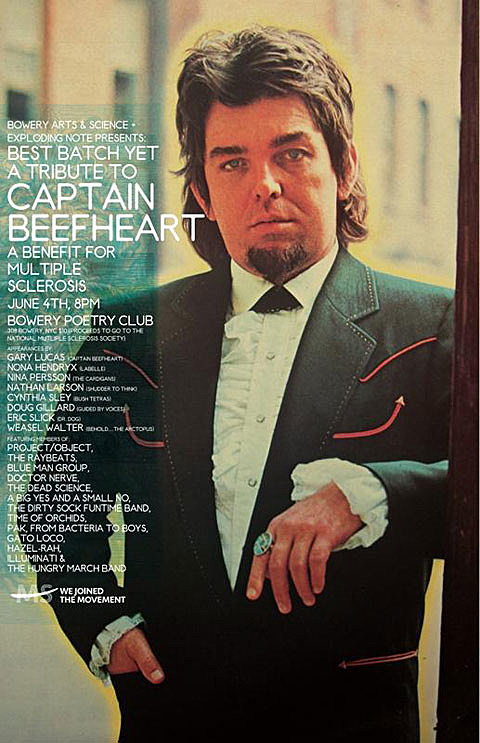 In Honor of the Big Apple BBQ