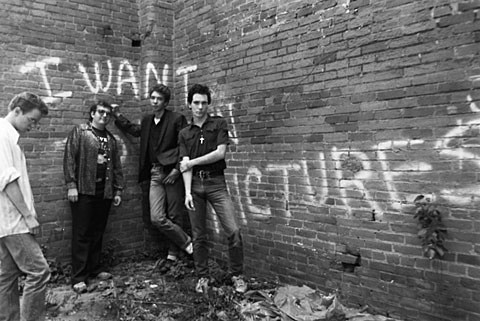 Cleveland's Death of Samantha existed from 1984 to 1992 and made fierce, riff-heavy rock (sometimes straight-ahead and ballsy, sometimes Television-y) with singer John Petkovic sharp lyrics overtop. Death of Samantha made three albums for Homestead (Gerard Cosloy's pre-Matador label) before fizzling out. (The band, which included Doug Gillard, went on to form the equally awesome Cobra Verde.) The original Death of Samantha lineup (Petkovic, Gillard, David James and Steve-O Eiredam) got back together a couple years ago and have played sporadic shows in Ohio.

Before the first of those reunion shows, Death of Samantha recorded some of their favorite songs live to tape, the results of which is new album If Memory Serves Us Well which sounds pretty fresh to these ears. You can stream it over at Spotify. To celebrate that record's release, Death of Samantha are playing a string of dates, including their first NYC show in 23 years, which will happen at Baby's All Right on May 29. Lame Drivers and onetime Cobra Verde bandmember Dave Hill will open the show. Tickets will be on sale soon.

Two of the DoS shows (Cincinnati and Pittsburgh) are opening for fellow Ohio indie rockers Guided by Voices. Here in NYC, Doug Gillard (who was also in GbV for a while and just released a new solo album that's well worth checking out) will open the sold-out Bowery Ballroom show.

All Death of Samantha dates are listed, plus a stream of "Savior City" from If Memory Serves Us Well, below...