Doveman at LPR in 2011 (more by Amanda Hatfield) 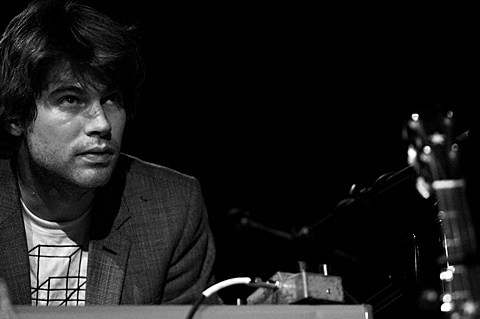 Doveman will continue his Burgundy Stain Sessions at Le Poisson Rouge into 2012 with LPR shows happening on April 13, July 13, October 5, and December 7. No guests have been announced for these shows yet, but as we saw last year, we can count on many interesting musicians to be making appearances at these shows. Tickets for all four dates are on sale now ($20 each or $60 for a four-show pass called "(Le) Billet Rouge")

Meanwhile catch Doveman aka Thomas Bartlet on 2/6 as part of MoMA's Modern Mondays, "a film discussion series at The Roy and Niuta Titus Theater 2."...

An Evening with Tom Kalin and Doveman
February 6, 7:00 p.m.
For this evening, musician Thomas Bartlett (Doveman) (American, b. 1981) and filmmaker Tom Kalin (American, b. 1962) will discuss their collaboration, which began with a series of short films inspired by Doveman's 2009 album The Conformist and continues with an ongoing project that explores the intersection of recorded and live music, digital composition, and projected film. The pair draw inspiration from themes of broken romance, the truth of small gestures, and transcendentalism in addressing such contemporary issues as displacement and urban isolation. Kalin, a prominent figure in the New Queer Cinema movement, is well known as both a feature filmmaker (Swoon [1992] and Savage Grace [2007]) and as an experimental filmmaker (Third Known Nest, 1991-99). He was a founding member of the AIDS activist collective Gran Fury, known for its provocative public art projects. Doveman is a band founded by the 30-year-old Bartlett, who studied piano with Maria Curcio in London before moving to New York City to attend Columbia University. His ongoing live performances, known as The Burgundy Stain Sessions, occur monthly at Manhattan's Le Poisson Rouge. Organized by Barbara London, Associate Curator, Department of Media and Performance Art.

More info and other related MoMA events, like Dan Graham on 1/23, at MoMA's site.

One of Thomas's recently played shows was as part Irish folk-music group The Gloaming at GlobalFEST (at Webster Hall). You can listen to the set at NPR who write:

In related news, Doveman's hard-to-find version of the Footloose soundtrack can now be streamed for free on Spotify.

All future Doveman dates (that we know about right now) are listed below...