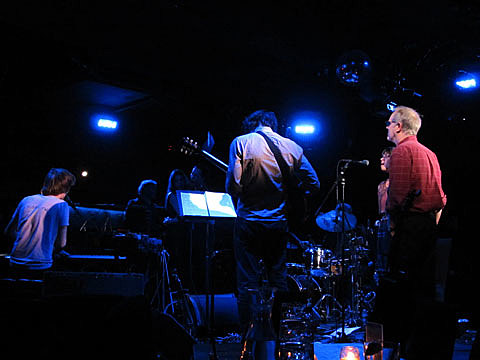 Thomas Bartlett's "Burgundy Stain Sessions" has carved out its own unique place in the NYC music scene, bringing tasteful, acclaimed songwriters together with some of the most skilled players in the city. The songwriters in the Burgundy spotlight have ranged from Beth Orton to St. Vincent to Rufus Wainwright to Glen Hansard. This night, however (last night, December 1st), seemed to be a new direction for Bartlett's ensemble, hosting Loudon Wainwright. Loudon rarely collaborates with other musicians and mostly performs solo, so the show was anticipated with cautious excitement and curiosity.

The night started out with the band quietly taking the stage, slowly melding into the opening song with a bit of a wink: Bartlett's "Drinking," which was navigated well by the group. Hannah Cohen joined as a guest vocalist on Bartlett's next song "Boy + Angel," foreshadowing her forthcoming set. Bartlett has mastered the art of making a wandering piano sound precise, and avoids musical clichés without abandoning them. He can wear many different hats on stage equally well, whether taking the reigns as lead singer or smattering notes carefully behind another.

The first guest of the night was Oren Bloedow. Bloedow is the instrumental half of Elysian Fields, but this performance focused on his abilities as a songwriter. He revealed a keen sense of well-crafted pop, in the Joe Jackson / Elvis Costello vein. But his lyrics showed a more complex sensibility, giving equal attention to the meaning and syntax of the phrasing and the actual phonetic sounds of the words themselves. This poetic nature of his songs proved to be the way in which they succeed and separate themselves from the pack. The band (which will be detailed later) provided a well-suited backdrop, displaying Bartlett's skill as the artistic equivalent of a live music A&R man. 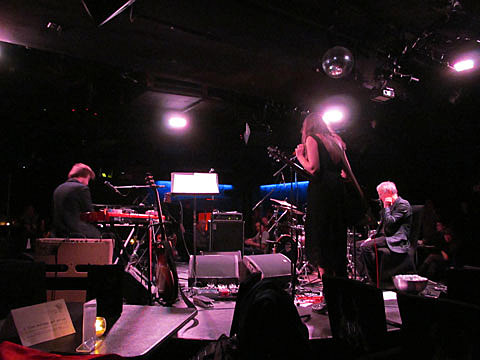 Next up was Hannah Cohen, who just finished her debut record (with Bartlett). She played a few smooth, dreamy numbers from the forthcoming album before changing pace with a samba-ish cover of 10cc's "I'm Not In Love." Cohen shows a gift for carefully placing melodies rather than pouring out her soul. The songs are tastefully restrained, even when showing off a vocal run, ghostly and delicate. She seems a perfect candidate to work with Bartlett. Cohen sounded at her best when the arrangement was stripped down, allowing the songs to loosen and bend. It will be interesting to see where she goes as an artist in 2012 and how her debut record sounds. A video preview both morose and sexy can be seen HERE.

Before the anticipated Wainwright set, Justin Vivian Bond was invited up to perform an odd epic heartbreak ballad that challenged concepts from self-identity to deism. This seems to be a trend in how Bond builds a song, as the night's encore echoed the same conceptual structure, a "patriotic" story song that implied thoughts on sex, politics, and natural selection.

Wainwright took the stage, laughing at the fact that he was "back on Bleeker Street." (Wainwright started out here in 1968.) His set began in a rather unexpected manner, a duet with Bartlett on Frank Loesser's "More I Cannot Wish You," from Guys & Dolls. From there, however, Wainwright launched into a few of his old classics, backed seamlessly by the house band (a phrase which seems to instantly undermine their talent). First was "White Winos," a devastating song about alcoholism and his relationship with his mother, which transitioned nicely into "Dreaming," based on a quote of his mother's, "I'd rather be dreaming than living." Wainwright is the quintessential songwriter whose music is morbid under the microscope yet cheerful under a casual glance. The songs are masked in bright melodies and performed with nonchalance, but closer inspection will almost always present the listener with a sharp dissection of the human psyche. Wainwright then played "Motel Blues," (a personal favorite) and a roaring rendition of "Muse Blues" which was most "rocking" moment of the night.

The final encore brought everyone up on stage (including returning guest Norah Jones) to collaborate on an interestingly wobbly re-working of Neil Young's "Only Love Can Break Your Heart," in keeping with the dreamy, melancholic theme of the night.

The band provided a thoughtful, dynamic backdrop for Wainwright (and all the evening's performers). Rob Moose's guitar was particularly great, at times supplying a bed of precise fingerpicking, other times creating a subtle dissonant distortion, reminiscent of his recent work with the Grammy-nominated Bon Iver. The rest of the band (Doug Wieselman on clarinet, Ray Rizzo on drums, Brad Albetta on bass) were just about all one could ever ask for in a backing band. They are well versed and experienced with the careful tactics of songwriter-accompaniment.

Bartlett revealed that this would be the last Burgundy Stain Session of 2011 but that they will be back in action early next year. They have created something that supports the musical community and promotes collaboration and songwriting. Here's hoping they continue to grow in 2012.

Catch Thomas, Doug and Loudon together again at Town Hall on December 15th.