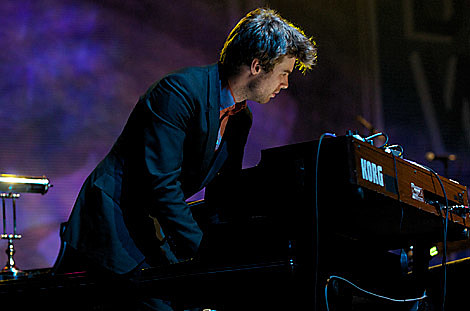 The follow-up to Doveman's 2007 record, With My Left Hand I Raise the Dead, is on the way. That still-untitled album will come out on Brassland Records later this year. You can check out a BV-exclusive preview from that record, the especially upbeat (for Doveman) song "Hurricane," above.

Doveman will be performing his/their latest work (alongside the rest of his catalog and maybe some Footloose material) at his Thursday, June 18th show at (Le) Poisson Rouge in NYC. Tickets are still on sale, and we have two pairs to give away. More details on that below.

At LPR, Bartlett will be backed by long-time Doveman member Sam Amidon, who's also opening the show, and Aaron and Bryce Dessner and Bryan Devendorf of The National -- all of those musicians appear on the new record.

As usual, Doveman has been busy playing keys behind other performers. On June 14th and 15th, he played with Martha Wainwright in her "Songs of Edith Piaf" show. Those sets were recorded with producer Hal Wilner to be released as a live record.

This summer Bartlett will tour with Antony & the Johnsons in Europe. The National have summer dates too, and don't be surprised if Bartlett ends up making some of those gigs.

We talked to Aaron Dessner about his history with Doveman, the progress being made on the new National album and a forthcoming Dark Was the Night movie (and possible European dates). That exchange, and all tour dates, is below...

BV: How far back does Thomas's musical relationship with you and other members of The National go?

Aaron Dessner: We knew of Thomas years ago because he used to write about the National in his column on Salon.com (not many people wrote about us then). Later we heard The Acrobat and learned about Doveman and basically started figuring out what an auteur he is with piano/keyboards. But we only met Thomas when he showed up at the studio in CT where we were recording Boxer in the Summer 2006. We were beating our heads against a wall basically getting nowhere and the few days he spent playing all sorts of keyboards through all sorts of pedals without ever having to be taught a chord sequence or a form were a highlight of an otherwise bleak period. Since then he's been a regular collaborator on National recordings and he often plays with us live too. Bryan, Bryce and I returned the favor and play a lot on the new Doveman record.

BV: Will Thomas be contributing to the new National record? How is that coming along?

Aaron: Thomas has already contributed quite a bit. His keyboards and pedals are strewn about our studio right now. Coercing him out of Harlem to come all the way down here to South Brooklyn is quite an ordeal, but once he's here we still don't have to show him any chords or forms so it's worth it. The National record is coming together I think. We are working on it all the time. It's already a black hole for me so I can't really say much more than that. Yesterday my brother and I shredded squalls of feedback through loopers all day which was fun. I'm almost positive we'll press mute on that this morning though. But that's where we are.

BV: Do you have any upcoming Dark Was the Night-related plans?

Aaron: There is a film being made about the Radio City Music Hall show and the rehearsals leading up to it. That's exciting. And there is talk of a show in London and Paris but we're not sure when we'll have time to make that happen. At the moment, my brother and I are also working on this piece called "The Long Count" for the BAM Next Wave festival in October. It's a collaboration with the artist Matthew Ritchie (check out The Morning Line) and we're working with Kim and Kelley Deal and Shara Worden and Matt Berninger. And there will be a 12-person ensemble. It's pretty elaborate. I'm nervous!

For your chance to win a pair of tickets to see Doveman at (Le) Poisson Rouge on June 18th, send an email to BVCONTESTS@HOTMAIL.COM with the word "DOVEMAN" in the subject. Include your first and last name. You must be 18 years of age. Two winners will be chosen randomly and contacted.