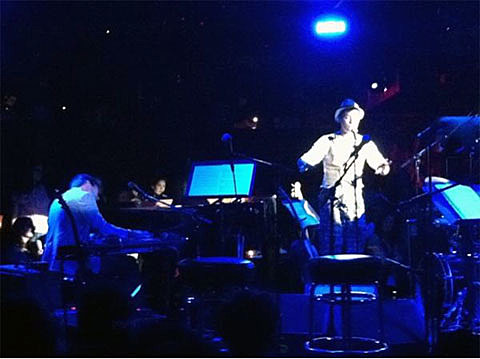 After missing the last two Burgundy Stain Sessions, I was glad to be back for the fifth installment of Doveman's salon-style shows at Le Poisson Rouge. Between the rotating cast of musicians and the experimental, anything-goes attitude, you never quite know what you'll get over the course of the evening.

Though multiple artists are on the bill, the layout is rather unconventional. Instead of a series of individual performances, all of the artists collaborate and contribute to one long set. It's not seamless, but that's kind of the point. "My goal is for things to be kind of gloriously sloppy here," the host, Thomas Bartlett admitted at one point.

Bartlett (aka Doveman), kicked off the evening with a soft, melodic song on the piano, but it wasn't long before he was joined by a trumpeter and clarinetist who deftly made their way through the crowd and onto the stage, playing all the way. After a few Doveman songs, The GOASTT, aka Sean Lennon and Charlotte Kemp Muhl (of Ghost of a Saber Tooth Tiger) jumped up from their perch on the side of the stage. Easily one of my favorite parts of the evening, the GOASTT portion ranged widely in emotion and style. One minute it was French spoken word (Lennon) peppered with onomatopoeia interjections (Muhl) and the next featured smooth accordion-rich melodies.

After a few more from Doveman, there was a one-song interlude to "give the band a break" and Barlett welcomed his friend Nathan to the stage to deliver his wildly entertaining "lesbian separatist murder ballad" about the Manson family. Though it sounds odd, it's really the frenetic pacing that keeps things interesting and keep me returning month after month.

As promised, Rufus Wainwright joined in after the break, to wild applause from the audience. Fresh from their Kate McGarrigle tribute at Town Hall, Bartlett and Wainwright (McGarrigle's son) played a few touching covers in addition to one from Wainwright's own discography, "April Fools."

At some point, Muhl and Lennon returned for the grand finale, which, after much buildup and back story turned out to be a cover of "Across the Universe" (with Lennon on backing vox). Apparently, it was the first time Wainwright and Lennon played the song since their collaboration nearly a decade ago for the post-9/11 peace show organized by Yoko Ono. Of course after the Beatles cover, which sent chills down my spine, the encore (the Neil Young cover song "Only Love Can Break Your Heart") was just icing on the cake.

I can only wonder what next month's show will bring.

No guests have been announced, but tickets are on sale for the June 24th show at LPR. Doveman also plays a free show in Prospect Park with Junip and the Books five days earlier. Rufus has some stuff coming up too.