photo: Phil Anselmo with Down at Housecore Horror Fest in 2013 (more by Trent Maxwell) 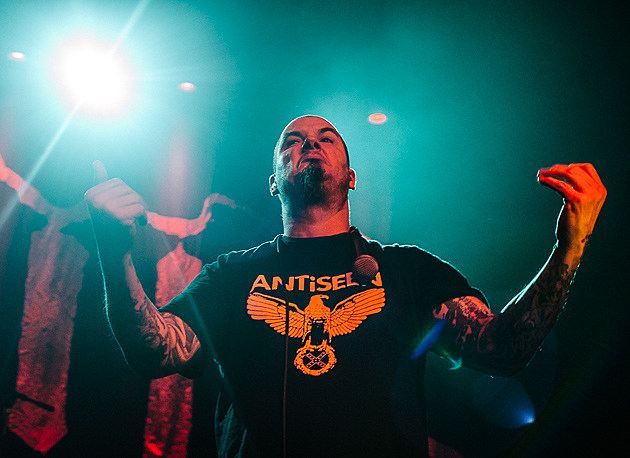 On January 22, former Pantera frontman and always prolific metal musician Phil Anselmo stirred up considerable controversy as he hosted the annual Dimebash show. Dimebash is an all-star concert that pays tribute to the late Pantera guitarist Dimebag Darrell, and this year it featured the likes of Dave Grohl, Robert Trujillo, Dave Lombardo, Gary Holt, and various others. Unfortunately this year's event was less joyous than usual, as Phil Anselmo, probably drunkenly, decided that it was a good idea to close the show by coming out on stage, giving a nazi salute, and yelling "white power."

After that video surfaced, Phil offered the following justification:

This predictably caused a lot of backlash, though not as much as it might have if it had been, say, Lars Ulrich, as Robb Flynn of Machine Head (who was at Dimebash) pointed out in a condemnation of Phil's remarks.

Despite his initial "no apologies from me," Phil eventually -- perhaps spurred by the remarks of Flynn and others -- apologized:

Even in the wake of the apology, things have continued to sour for Anselmo. His sludge band DOWN just had their appearance at FortaRock fest in the Netherlands cancelled by the festival organizers. The organizers say:

There has been close consultation between all parties recent days, since we wanted to make a well informed decision. On that basis, the decision is made to cancel the act. We want to make clear that there is no room for racism or fascism on FortaRock.

Anthrax's Scott Ian also came out hard against Anselmo in the wake of the apology, and suggested he donates to Holocaust education organization Simon Weisenthal Center. He posted the following message to instagram:

Phil Anselmo is an extremely influential person in the metal community, with his tentacles in a lot of different projects, like his label Housecore Records, his festival, and his many bands with many different important figures of the metal world at large. Hopefully that doesn't stop the industry to continue to hold him accountable.