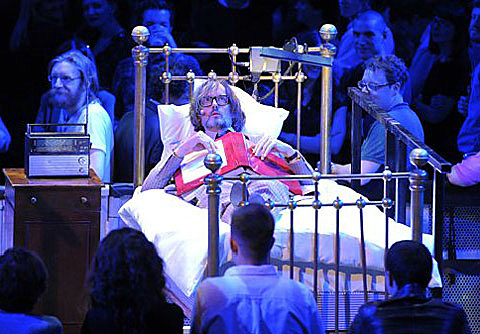 You may remember that Jarvis Cocker performed a very special show at Royal Albert Hall with the BBC Philharmonic and the Manchester Chamber Choir, as part of the Beeb's fourth-annual "Underwater at the Proms." A literal live bed show, Jarvis held court from a big four-poster:

Accompanied by the BBC Philharmonic at this year's Proms, as Jarvis drifts off to sleep he soon finds himself on an underwater voyage down to the endless night of the ocean bed. En route, he meets psychoanalyst Carl Jung, two submariners called Roger trapped in a tiny submersible and a free-diver experiencing "the rapture of the deep".

In other news, Jarvis was to have taken part in an concert tonight (12/1) in Bristol, UK celebrating the 50th anniversary of classic British kids adventure series Thunderbirds with Portishead's Adrian Utley, Goldfrapp's Will Gregory and the British Paraorchestra. Unfortunately, he fell ill and will not be participating. The concert also celebrates the music of Thunderbirds creator Gerry Anderson's other shows like Stingray, Supercar and UFO.

In other news, Pulp's classic Different Class album turned 20 this year and Jarvis has mentioned he's working on new music.