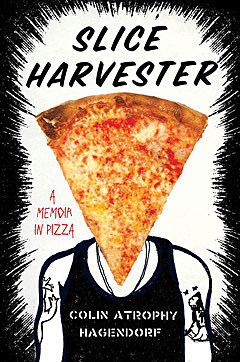 Colin Atrophy Hagendorf started the blog Slice Harvester in 2009 with a goal of reviewing every slice joint in Manhattan. Two-and-a-half years and 362 pizza places under his belt later, he achieved that goal. (You can watch him on a 2012 FOX 5 'Good Day NY' segment.) He has since parlayed that into a book, titled Slice Harvester: A Memoir in Pizza, which is out today (8/11) via Simon & Schuster. A punk who has published zines since he was 14, Hagendorf celebrates the book's release tonight at Silent Barn, with live performances from Downtown Boys and In School, plus "hopefully" UNISEX as DJs. Says Colin:

There's gonna be 69 pizzas. Come eat them. Come watch bands. Come watch me mouth along to "Deja Vu (Uptown Baby)" by Lord Tariq & Peter Gunz, specifically when Gunz says "neighbors on the block call me Lex cause I push a Lex and I rock a Rolex and I lounge on Lex and I love sex" and when Tariq says "don't talk shit when I'm around you, I'M FROM SOUNDVIEW" or "I'm from the Bronx wipe ya feet when you step in my house," because I get kinda hype at those lines, tbh.

The show starts at 8 PM as is free before 10 PM and $5 after that. Books will be available at the show.

There will also be a free Slice Harvester event at WORD Brooklyn on August 19. In addition to Colin, there will be pizza-themed readings from Pilot Viruet, Scott Weiner, Suzy Exposito, Lola Pelligrino, and Deenah Vollmer. Vol. 1's Jason Diamond will host, and there will be free pizza and beer.