Downtown Boys at Rough Trade in May (more by Amanda Hatfield) 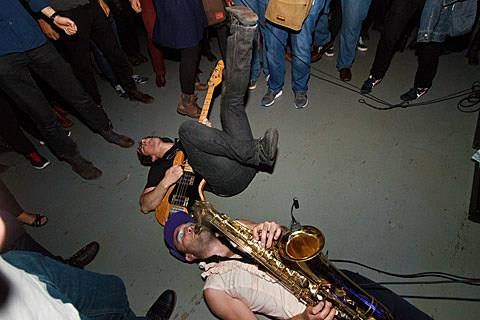 Providence's Downtown Boys are kicking off a short Northeast tour in NYC tonight, which wraps up in Connecticut two weeks later. Downtown Boys are the kind of band you just have to see live to fully experience. They make political, socially aware punk, fueled by an ace saxophone player, and though their message is serious that doesn't mean they don't have fun. Most of the members usually end up in the crowd (and sometimes fans end up on stage), making the whole show a big party. TONIGHT's show (8/15) is at Brooklyn's Shea Stadiium with support from local bands Weird Womb, Vomitface and Big Huge. $8 at the door gets you in. All dates are listed below.

Vomitface have other local shows coming up, including opening for Single Mothers (who just announced their debut LP) at Cake Shop on August 30. They were also added to the Studio at Webster Hall (9/25) stop of Turnover's tour with Light Years and Malfunction. Bellwether are on that show too, and tickets are on sale now.

Downtown Boys' most recent 7" came out on Priests' Sister Polygon Records. You can stream it and watch the video for "Slumford Sal," with their list of tour dates, below...