The Orwells at BV-SXSW 2013 (more by Amanda Hatfield) 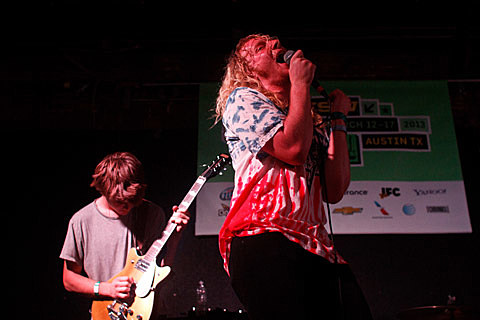 Since we last spoke, some additions to the lineup have been made. Garage rockers The Orwells (who have other upcoming dates) were added to tonight's Palma Violets and Guards show at Bowery Ballroom, making for an all-around great bill for fans of catchy, upbeat rock. The Orwells just revealed the Dave Sitek-produced track, "Other Voices," off their upcoming EP of the same name (due out 6/25 via East End/Canvasback), which you can stream below.

SZA, who recently put out the trippy S EP, has been added to Sky Ferreira's show at Mercury Lounge tonight. Teengirl Fantasy and Mess Kid, who were already announced for the festival but not that specific show, were also added as openers.

Onetime Twin Shadow bassist Rush Midnight (who has other upcoming shows) was added to tonight's show at Pianos with Royal Teeth and Sparxx.

LODRO (who play a BrooklynVegan-curated show on Monday), Xray Eyeballs, and DJ Dog Dick were added to DIIV"s show at Mercury Lounge on Saturday.

Low Fat Getting High, who have a new EP on the way and other upcoming shows, open for Trash Talk and Cities Aviv at Cake Shop on Saturday.

Meanwhile, Ryan Hemsworth made a new mix in anticipation for the festival, which you can stream, along with the tracklist below. And if you were wondering, yes, it does have his remix of the Backstreet Boys' "Show Me the Meaning of Being Lonely."

A stream of that mix, the Orwells stream, and the updated Downtown Music Fest schedule below...

"I usually go into mixes with an emotion or a season or a memory in mind. It was finally warm yesterday when I recorded this one, and I'm looking forward to Downtown Festival as my first ~summer festival~ of the year. Antwon and Earl Sweatshirt are super fun performers and I guess this is just a warm up for what to expect from myself at our show." - Ryan Hemsworth

FRIDAY MAY 10
Capitale
Black Hippy 1am
Fat Tony 12am