Black Hippy at Downtown Music Festival in NYC (via @me_acosta) 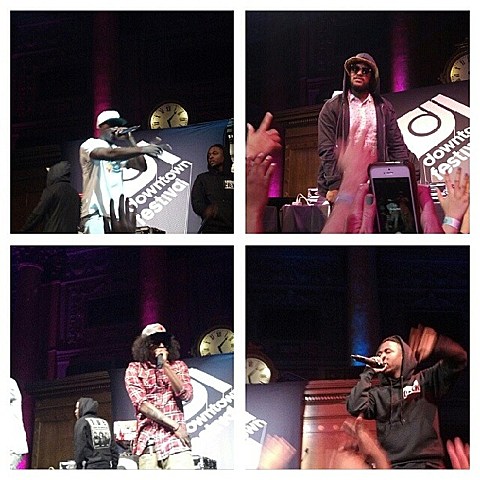 The Downtown Music Festival, which is coming to multiple North American cities this year, kicked off its first one in NYC on Friday (5/10) across various LES venues.

The biggest highlight of the artists I saw was the Black Hippy crew, who went on at Capitale at around 1:30 AM. All four guys, Kendrick Lamar, Schoolboy Q, Ab-Soul, and Jay Rock, came out together for a few posse cuts to start the show, and then Ab-Soul, Schoolboy Q, and Kendrick each did their own mini-sets to follow that. They had a ton of fun with it, focusing on crowd pleasers, and taking it a little less seriously than when the members play their own gigs (in a good way). We've seen them make appearances at each other's shows, but getting a chance to see each rapper in the group sampling their own stuff and no one member taking the limelight over another is an entirely different appeal. It showed how diverse each rapper really is (Kendrick has the introspective songs, Q has the party bangers, and Ab-Soul has the tripped out ones -- and PS, we want to hear more from Jay Rock!), and like I said, it was a super fun show.

Houston rapper Fat Tony opened that show with a solid set, which he used much of to promote his new album, Smart Ass Black Boy, which comes out June 11 via Young One. If you haven't heard it yet, you can stream that album's single, "Hood Party," which features Kool A.D. and Despot, below. Tony will be back in NYC for the free 4Knots Music Festival in June. 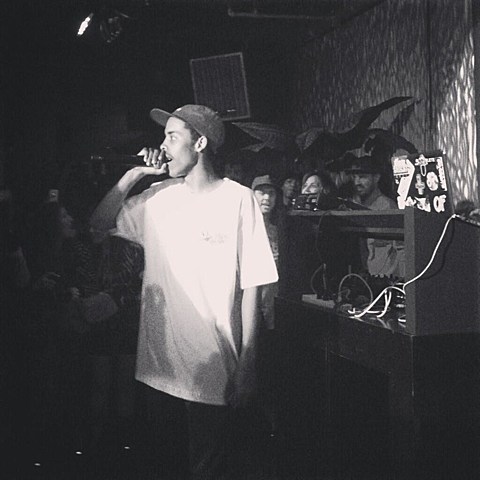 Another standout of the festival for me was Earl Sweatshirt, who played Element at around 11 PM with Syd tha Kyd as his DJ. Odd Future supporters have turned on the group a bit (or at least the way it was when Tyler and Hodgy Beats were basically running it) and Tyler's so-so new album Wolf didn't help that, but Earl's been hailed as something of a saving grace for the group. It's obviously too soon to tell if Earl's gonna pull it off (though his recent singles have been promising), but whether intentionally or not, his show on Friday worked by being good for very different reasons than the ones that initially gained Odd Future attention. He didn't talk much between songs, didn't have any "punk" stage antics of a large group of hypemen, and OF's shock-factor-turned-predictable-offensiveness was almost never to be found. Instead, Earl focused on classic-style rhymes and proving himself as an adept emcee. There's still no release date for his upcoming album, Doris, but once it does come out, it should be pretty interesting to see where he goes with it.

More Downtown Music Fest coverage to come. Meanwhile, a video of Earl playing a new song at Element, Kendrick playing "Bitch Don't Kill My Vibe" at Capitale, and that Fat Tony stream below...