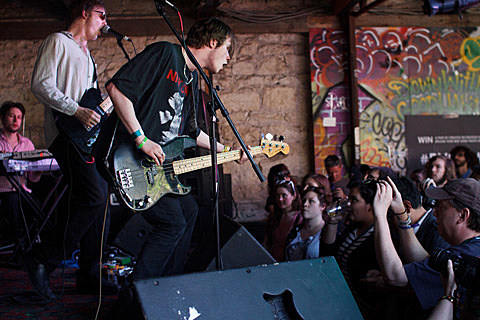 The first festival takes place in NYC from May 10 to 11 across multiple venues, including Bowery Ballroom, Mercury Lounge, Rockwood Music Hall, Angel Orensanz, Pianos, Cake Shop, Tammany Hall, and Element. The full lineup and schedule for the NYC shows has not been announced yet, but we do know that it includes the previously announced Palma Violets show at Bowery Ballroom (which is now sold out, but tickets are still available for PV's MHOW show a day earlier). We also hear that they're trying to put up an outdoor stage and shut down Ludlow St to car traffic (which Pianos and Cake Shop are both on) for the festival, but no exact word on how that will work out.

2-Day Passes for the NYC festival are on sale now and tickets for individual nights go on sale Friday, April 12 at 11 AM.

After NYC, the festival will also pass through Philly, Toronto, Boston, LA, Denver, and Las Vegas, but the dates for those cities has not been announced yet.