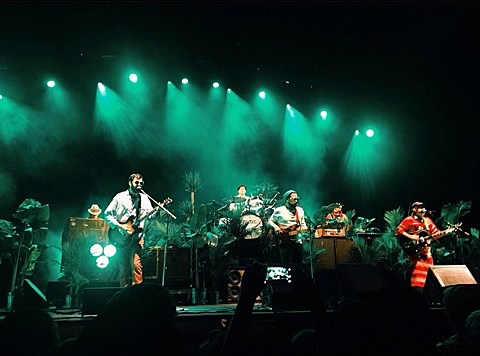 On Saturday night, Dr. Dog treated us to an all-night party at the Mann Skyline Stage sharing the spotlight with Hop Along, The Front Bottoms, and Mac DeMarco. At first glance, this line-up sounds like it might not work but as proven by the end of the night, Dr. Dog is open to many sonic adventures, so it only makes sense that in their hometown, they took a chance and exposed their fan base to some music that may go against your average tour promoter's instincts.

As soon as the gates opened, many a hoodied 20-something rushed towards the front of the stage to get a good spot for the openers. Hop Along played for only 30 minutes but they made it count. The band played favorites from their last album, the amazing Get Disowned, the Shaking Through single "Sister Cities," and played two new songs that continue their trajectory to the greatest band I've heard since Throwing Muses blew my mind in the late-80's. No matter how many times I hear "Tibetan Pop Stars," it remains to me one of the most beautiful rock songs of the 2010's. [The Key]

Pennsylvania rock shapeshifters Dr. Dog are fresh off an epic show in their home state that they played this past Saturday (9/13) at Philly's Mann Center with a seemingly weird but impressive lineup of guitar pop goofball Mac DeMarco, lyrical folk/pop punks The Front Bottoms, and Philly's own indie rock crew Hop Along. (Not to mention it was the second epic bill in a row at the Mann Center that weekend.) Anyone go? How was it?

Now that that's behind them, Dr. Dog have announced an EIGHT night run happening in NYC this January before they play My Morning Jacket's One Big Holiday in Mexico. The shows happen January 9-12 at Music Hall of Williamsburg and January 14-17 at Bowery Ballroom. Tickets for those shows go on sale Friday (9/19) at noon with AmEx and artist presales starting Wednesday (9/17) at noon. That run and the MMJ show are their only announced dates at the moment.

Flyer for the NYC shows, with videos of all four artists from the Philly show, below... 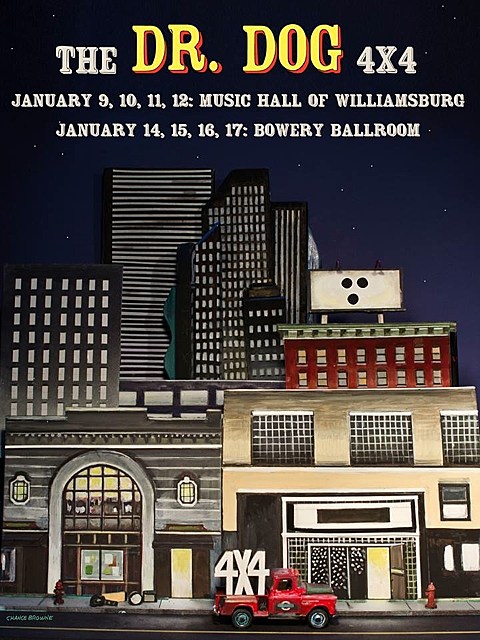