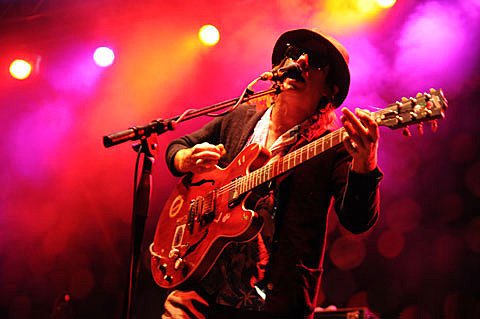 We never meant to make you angry but we've received dozens of emails over the past few weeks asking us why we were ignoring the east coast. For a variety of reasons we had to keep our mouths shut, but we will no longer be silenced! This Saturday October 16th, our winter tour goes on sale and we're gonna get to a bunch of places we've been meaning to get for awhile. - Dr. Dog

Hold your horses, people! Though maybe it wasn't New Yorkers complaining because Dr. Dog played NYC twice in the past two months (although one was open to NYU students only). The band will hit the road for a string of East Coast dates in the new year, including Terminal 5 on 2/18 with The Head and the Heart who will open all shows on that leg of the tour. Tickets for the NYC show are currently on AMEX presale, and go on regular sale at noon on Friday (10/15). All dates below.

In addition, Dr Dog want to "make amends" by offering a new song for free download. Grab "Nobody Know Who You Are" above. The track is part of a four song tour double 7" that will also surface on iTunes in the following weeks. One of the other three songs available on that 7", "Take Me Into Town", is also available to stream below.

Now that East-coasters have cooled their jets a bit, remember that Dr. Dog will show love to the rest of the country over the next few months as part of a US tour with Here We Go Magic. But before Here We Go Magic head out with Dr Dog, the band will play Bowery Ballroom TONIGHT (10/13) with The Love Language (Merge Records) and Delicate Steve (who just signed to Luaka Bop). Tickets are still available.

Delicate Steve also has some CMJ shows and will head out on tour with Fang Island in November. All dates below.

In other Dr. Dog related news, Juston Stens & the Get Real Gang featuring ex-Dr. Dog drummer Juston Stens plays TONIGHT at Pianos, one of three shows in the NYC area as the band will be back at Pianos two weeks later (on 10/27) and will play Littlefield as part of the Park The Van showcase on 10/22. There the band will be joined by headliner David Vandervelde, in addition to Generationals, Brass Bed, Giant Cloud, From A Fountain, and Young Nick Krill (of The Spinto Band). Tickets are on sale, or use your CMJ badge.

All tour dates and that Dr. Dog stream, and the new videos for "Shadow People", below.