Dr. Dog @ Terminal 5 in May (more by Tracy Allison) 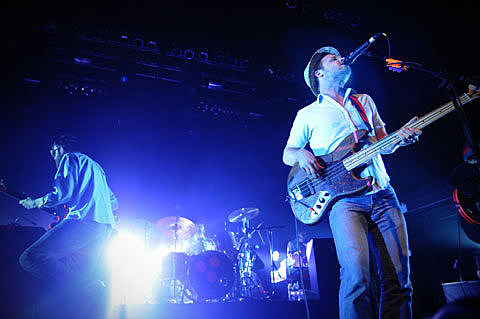 Dr. Dog's free Beach at Governors Island show is happening on Sunday, August 15th. The openers for that show will be Eli "Paperboy" Reed & The True Loves and recent Domino signees Chief.

That gig is in advance of Dr Dog's October/November North American tour with Brooklyn's Here We Go Magic. No NYC date for that as of yet, but its currently scheduled shows are below. Here We Go Magic, however, does have a New York show, booked for August 11th Coco 66.

Dr. Dog singer-guitar player Scott McMicken has a solo show coming up at the Rock Shop on Sunday, August 22nd. Tickets are on sale. That's actually one of three solo dates he has planned with Springs, which is the musical name of Brooklyn's Mike Visser. Mike recorded a song with Scott as part of the Shaking Through Series, and a video of that is below. Springs also has a show with Sharon Van Etten at the Bushwick Starr on August 7th and a July 30th show at Arlene's Grocery.

Also coming up are some shows by Dr. Dog-related band Juston Stens & the Get Real Gang, the project of Dr. Dog's ex-drummer Juston Stens. Juston plays with TV Torso and Slow Animal at Death By Audio on August 25th, and then with ARMS and TV Torso at Mercury Lounge on Friday, August 27th. Tickets are on sale for the Manhattan show.

All tour dates, and video of Dr. Dog playing their single "Shadow People" on Craig Ferguson on July 2nd, are below...

Shaking Through: Springs from Weathervane Music on Vimeo.