Dr. Dog at Terminal 5 in February (more by Amanda Hatfield) 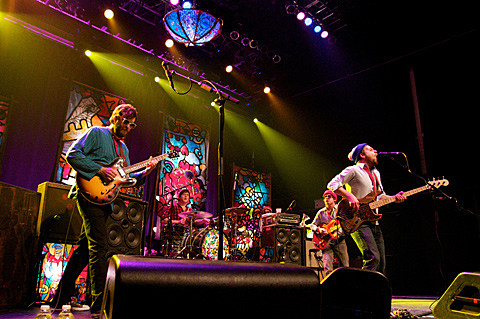 Dr. Dog has been an added as an opener to the Bright Eyes show at Williamsburg Waterfront. Tickets are still available.

A couple of weeks later they'll take part in another waterfront show in their home city...

"Music, film, visual arts and more will highlight the inaugural WHYY Connections Festival Friday, September 2 and 3, 2011. This exciting event, hosted by WHYY in partnership with the Delaware River Waterfront Corporation, will kick off Friday evening with a special advanced screening of episode 1 of Ken Burns' Prohibition. On Saturday, WHYY will showcase its commitment to the arts with live musical performances by Dr. Dog, The Baseball Project, Toy Soldiers, Kuf Knotz, Birdie Busch, and more!"

Dr. Dog are also at work on a new album. Check out a set of pictures from the recording sessions at their facebook. All tour dates below...