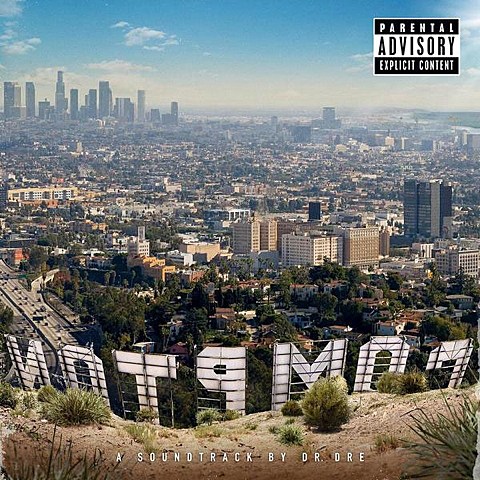 As you probably know, N.W.A. biopic Straight Outta Compton hits theaters next week (8/14) and the soundtrack to the movie is Compton: A Soundtrack by Dr. Dre, which is technically the first Dr. Dre album since 1999's 2001. If you're wondering why he scrapped Detox: "I worked my ass off on it, and I don't think I did a good enough job."

The album features appearances by Kendrick Lamar, Snoop Dogg, Eminem, The Game, Jill Scott, BJ the Chicago Kid, Marsha Ambrosius, Xzibit and more. It's out now. Dre says he's donating all the royalties from the album to help start a performing arts center in Compton. Tracklist below.

Noisey also has an exclusive 11-minute HBO First Look of the biopic, which you can watch below.

Ice Cube & special guests will be performing what's billed as Straight Outta Compton Remix at Riot Fest Denver & Chicago. No word yet on exactly what's in store, but we also know that N.W.A. are talking about a reunion tour with Eminem in place of the late Eazy-E. N.W.A. members reunited on stage during the BET Experience in June, but Dr. Dre didn't show up to that one. Watch them playing "Fuck The Police" at that show, below.