photo: Dragged Into Sunlight at MDF 2012 (more by Fred Pessaro) 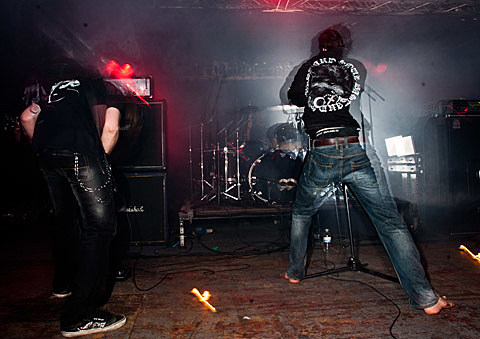 Brutal UK doom outfit Dragged into Sunlight has announced a loaded North American tour with like-minded NYC brutalists Primitive Man and Churchburn, Salt Lake City's Cult Leader, and North Carolina's Make. Primitive Man will be involved for the whole thing, while the other bands will be joining up for various legs.

The band kicks things off at Maryland Deathfest before stopping in NYC for a show at Bell House on July 1. That show will feature Cult Leader and Churchburn, and tickets go on sale Wednesday (1/20) at noon.

Stream Dragged Into Sunlight's 2012 LP Widowmaker, along with songs fro Cult Leader, Churchburn, and Primitive Man, and check out all tour dates below...