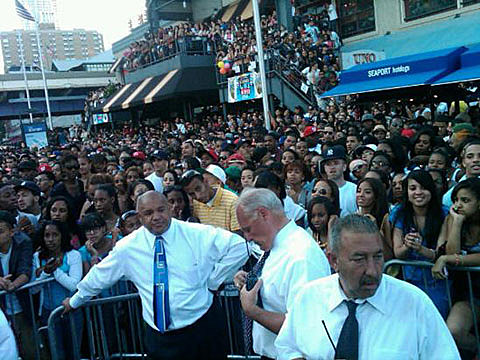 Another Drake show in New York has been nixed before the rapper even got a chance to take the stage. Drizzy was in talks to play a free outdoor show July 16 as part of ABC's "Good Morning America" summer concert series. However, the Drake show has been squashed and the cast of Broadway's "American Idiot" will fill the upcoming slot instead.

A spokesperson for ABC confirmed that a potential Drake show was in the works. "We were interested in having Drake perform, but he was never officially booked," an ABC rep told MTV News. In addition, a spokesperson for the New York City Department of Parks & Recreation told MTV News that concert organizers had simply decided to go with another act. "There was an open date on the calendar for July 16, but they decided to feature the cast of the Broadway show 'American Idiot,' " a rep said. [MTV]

Drake is playing Radio City Music Hall on September 29th though. Tickets go on "Internet Presale" at 10am (password = HEDRAKE or venue or DZ100), and general sale starts Saturday at 10am.