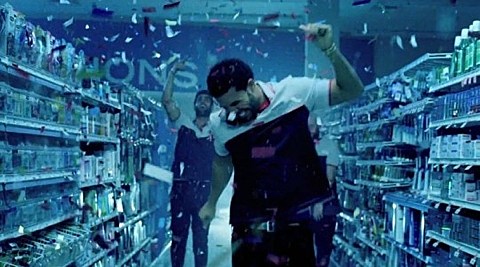 Rapper J Cole released his new album, Born Sinner, this week, and on Wednesday (6/19), he brought his tour in support of it to NYC for a show at Irving Plaza. During Cole's set, Drake came out to perform his verse on "In The Morning," after which Cole said to Drake, "You got classic records... could you please do some shit I guarantee they all will know?" Drake then stuck around to perform his song "Say What's Real" and his huge recent single, "Started From the Bottom." Check out a video of Drake's whole appearance at J Cole's show below.

Meanwhile, as mentioned, Drake is kicking off a tour of his own this year with support from Miguel and Future. That tour comes to the NYC-area on October 26 at XL Center in Hartford, October 27 at Prudential Center in Newark, and October 28 at Barclays Center in Brooklyn. TIckets for those shows go on sale today (6/21) at 10 AM.